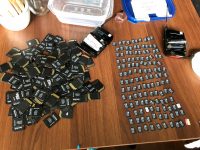 When the BBC needed a specialist sound team to work on their 2019 ascent of Kenya’s Mount Kilimanjaro in Kilimanjaro: The Return (BBC1), they turned to Mark ‘Shirley’ Owen and the team at Bastwick Audio.

Tom Hutchings, Executive Producer of Kilimanjaro: The Return called for a radio mic system that combined on-board recording, exceptional audio quality and ease of operation. He knew that the Bastwick Audio team would be recording at over 19,000 feet above sea level, and the lack of oxygen made simple menus a necessity.

Mark of Bastwick Audio has worked all over the world and in some of the most extreme environments. His credits include Escape To The Legion (C4), 71 Degrees North (ITV), Bear Grylls – Mission Survive (ITV), and Extreme Dreams (C4). Bastwick Audio has also supervised on several other Comic Relief projects, such as The Big Red Nose Desert Trek (2011), David Walliams Thames Swim (2011), and John Bishop’s Week of Hell (2012).

“The A10s were the perfect match for Kilimanjaro: The Return. As well as being light-weight, and simple to use, their build quality was robust enough to withstand the rigors of the environment. DoP [Director of Photography] Lee Yorke decided to shoot the climb on a mixture of Sony FS7’s and F55’s and the A10’s were easy to attach to the cameras for use as wireless-hops, as well as serving as on talent radio mics and as wireless booms.”

“We used 18 simultaneous channels on the A10s, for the celebrities, the wireless booms and camera hops. Not a single frame of audio was lost due to the A10’s excellent on-board recording facility and the Mic2Wav converter which was both easy to use and 100% reliable. The Bluetooth App was also an excellent addition to the workflow, allowing us to alter gain structures and control recording without having to ask the talent to remove layers of clothing, which was especially useful during those sub-zero early morning starts,” said Mark.

When Mark and his team reached the summit, they were asked to pull back, well outside conventional radio mic range, so that a drone could fly over and get a wide shot of the whole summit with the climbers at the center. Every syllable of the voyagers’ celebrations was perfectly recorded and easily synced to the drone footage thanks to the A10’s on-board recorders.

You can learn more about Bastwick Audio and their work at www.bastwickaudio.com.