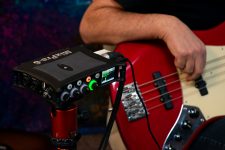 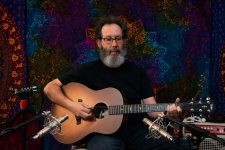 SD: What’s the process for arranging jam band songs down to a solo musician?

It all starts with heavily curated song selection. The Grateful Dead catalog includes a massive number of studio recordings and live performances both from the band itself and numerous solo and side projects by Jerry Garcia and Bob Weir. The catalog encompasses every style, genre, form, and time period. Most importantly, I am looking for songs that speak to me on both a musical and emotional level. As a solo performer I am searching for songs that could work in the stripped down instrumentation of voice and acoustic guitar. I lean towards songs that tell a story rather than jam oriented or good time songs. The Dead classic “Truckin” which is an autobiographical song about the band’s adventures on the never ending road is a great example. Luckily the Dead’s catalog is full of these types of songs.

Once a song is selected, I maintain a deep reverence for the original lyrics and melody. Other than these basic compositional elements each new arrangement is a clean slate including rhythmic style, tempo, time signature, key, melodic hooks, structure and feel. My overarching  concept is that each arrangement is a reimagined version of the song that sounds like it was originally intended for solo voice and guitar. Sometimes this process happens fast though occasionally this can be a rather long journey with multiple ideas and revisions being rejected and refined over a period of months. One tool I utilize for this includes alternate guitar tunings which can provide subtle and unexpected chord voicings and colors. You can hear this clearly on my version of Bob Weir’s “Cassidy”.

What made you choose the MixPre-6?

I came across the Sound Devices MixPre-6M by total chance very shortly after it was released. At that time, I was just starting to collect up enough fully formed arrangements to start playing out and was looking for an extremely simple and portable way to do high quality recordings of my shows. At that time I owned a great sounding recording interface but, of course, it needed to be connected to a computer and DAW. This was definitely not a portable set up and was not practical for a solo artist with no crew or road support.

As I started to learn more and more about the MixPre-6M and it’s features and capabilities I realized that it would work perfectly for remote music recordings. At that time I was not familiar with Sound Devices but came to learn that the company had been successfully manufacturing high end portable recorders for the film and TV sound recordings for years. I watched a bunch of videos and some reviews and decided to purchase one. I must say I was really impressed as soon as it arrived. The very small form factor, ability to run on batteries and record anywhere without a computer were big pluses the actual sound quality of the recordings was what really blew me away. The built in musician oriented features like reverb were also a big benefit and sound really great. Shortly after that I started using the MixPre exclusively for both live and studio recording.

How has the MixPre helped on the project?

The MixPre proved invaluable on the project and was the only interface used for all the tracks running directly into a Mac loaded with ProTools. We also used the MixPre for our headphone mixes and main monitoring system for the entire project. We used the built in Kashmir preamps exclusively for each and every mic and sound source. In each case they sounded great on everything we connected to the MixPre. This included an SM57, Rode tube mic, a large diaphragm condenser and my matched set of Peluso P28s small diaphragm tube condensers. The Pelusos were the principal mics used on the main rhythm acoustic parts, usually played on my Taylor 717e Grand Pacific, with one set of the preamps set to stereo mode. About ten different guitars were used during the recording process and the MixPre was great at capturing the unique sonic qualities of each.

Just about all the songs were recorded track by track, laying down the main rhythm guitar, then vocals, guitar overdubs and so on. On the track “Dark Hollow” we used all four inputs at once with a crazy four mic configuration that my engineer came up with to capture the voice and guitar live with no issues at all.

On two of the tracks I broke out a couple of my basses to add some low end. On “Sugaree” I used a really old passive bass with black tape wrapped flat wound strings that features a single custom wound Dark Star pickup that is reminiscent of the pickups found on the original Guild Starfire bass that was a favorite of Grateful Dead bassist, Phil Lesh. On “Reuben” and “Cherise” you can hear my incredible Mike Lull M4V, an updated version of a Jazz bass with active EQ and preamp. Both of these basses were easily handled and sounded great plugged directly into the Kashmir preamps.

The EP “Five Grateful Songs from the Dead” is now streaming on all major platforms. To learn more about Bach Plays Dead, visit the official Facebook page.