There are no resellers in your area. Please select another option from the drop-down menu. 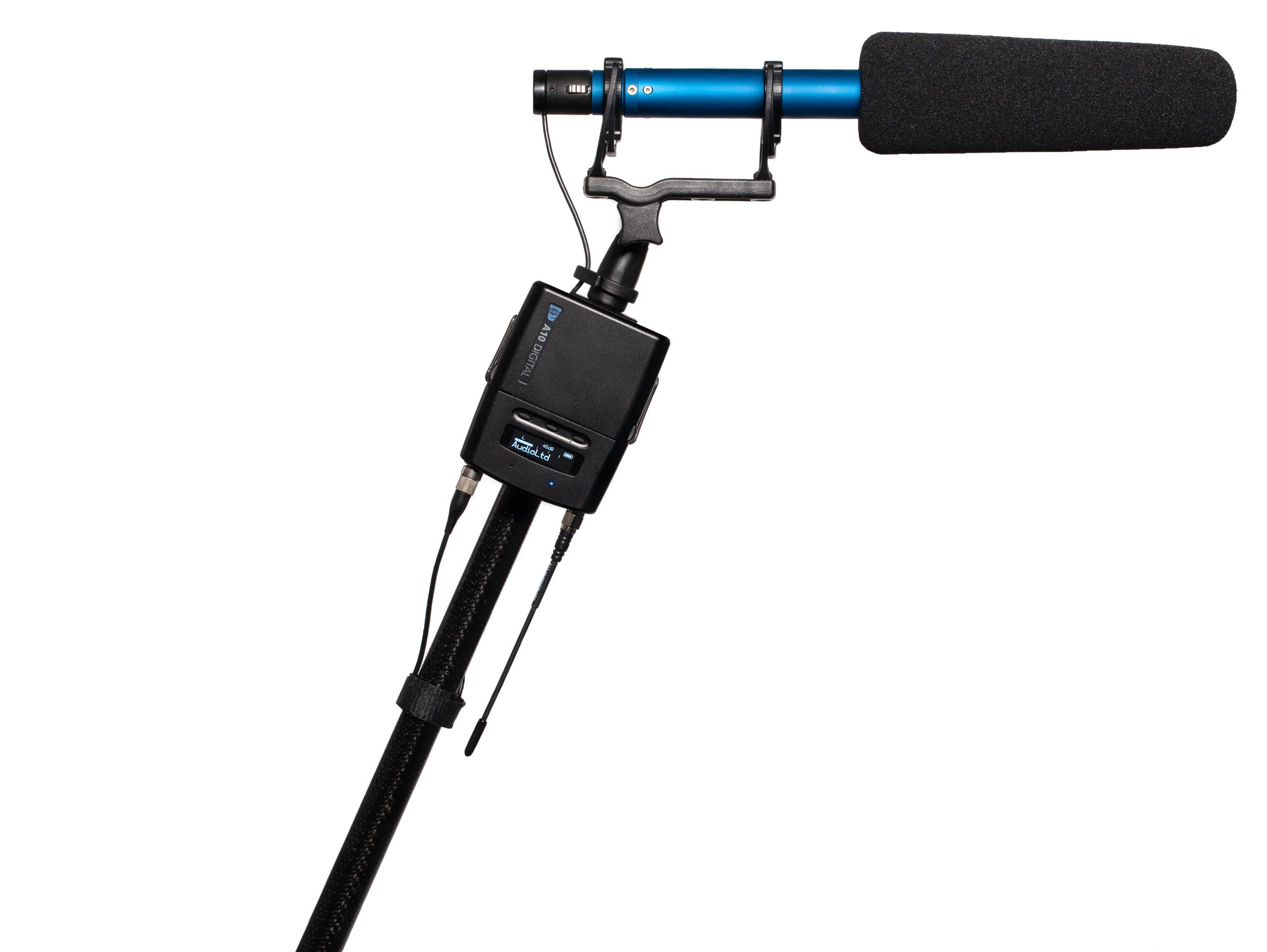 Digital wireless for today and tomorrow.

The A10 Digital Wireless System is designed for the technical demands and requirements of today’s RF-hostile, multi-channel productions. The A10-TX and A20-Mini digital transmitter and A10-RX two channel receiver deliver broadcast-quality audio and reliable digital RF performance with an easy, multi-system setup.

The A10’s proprietary digital RF topology and Advanced Digital Diversity System is the result of years of research, laboratory experimentation, and customer experience. The result is a wireless link with full 20 kHz audio bandwidth, high dynamic range, ultra-low distortion, an extremely low 2 millisecond end-to-end delay in Standard modulation. The A10 System allows the user to operate up to 20 channels in an 8 MHz TV channel, maximizing spectrum efficiency.

With firmware version 5.00, the A10/A20 Wireless System delivers the longest transmission distance of any system on the market.¹ The state-of-the-art, 100% digital long-range modulation offers the same great audio quality (10 Hz – 20 kHz) as our Standard modulation scheme with a longer range for both line-of-sight and heavy multipath transmission.

The core of the A10-TX transmitter is its low-noise, high-dynamic-range analog input. It accepting signals from low-level lavalier microphones to balanced line-level. The 3-pin LEMO input offers analogue limiters, 5 volt bias for lavalier microphones, as well as 12 and 48 volt phantom power for balanced microphones.

Click on each group to expand. Specifications are subject to change without prior notice.

Is a digital wireless system better than an analog system?

Read this article for more information!

If I purchase the slot version of the receiver (A10-RX-SL) can I change it to the connector version (A10-RX-XLR), and vice-versa?

What does a “wideband” system mean, and is this wideband?

Wireless manufacturers use the term “wideband” to indicate that their system can tune and operate over a wide frequency range. The A10 System is a wideband system. The A10-RX receiver can tune over the entire operating range of the system.

The C and D band systems are not available in the U.S. since these bands include frequencies that are unavailable for use in the U.S. The D band system is intended for customers in Europe who want the flexibility of working in the United States but want to keep Ch 38, 39, 40 (606-630 MHz) for the UK, and some parts of Europe. A U.S.specific receiver is available that limits its operating range to frequencies legally usable in the U.S (470-608 MHz).

The RSSI is a visual representation of how well the antennas on the receiver are picking up a wireless microphone. The Q-meter displays the difference between the signal from the transmitter and any interference. Use the Q-meter to confidently choose frequencies which will give the best performance and range! Learn more about the Q-meter at sounddevices.com/quality-meter

What’s the difference between Standard and Long Range Modulation?

I am in the U.S. and the 600 MHz range is now largely unavailable for wireless systems. Is the A10 a legal system and will it continue to be?

In short, yes. The A10 System was designed for today’s RF regulatory environments. U.S.-specific models of transmitters and receivers are available for the U.S. market. They meet the stringent transmission mask requirements of the FCC and their frequency plan accommodates the changes in the 600 MHz band. U.S. receivers cover from 470 MHz to 608 MHz. U.S. transmitters are offered as the A10-TX-AU (470-548 MHz) and A10-TX-BU (518-608 MHz). U.S. transmitters do not record when set to Lav input.

Why are different antenna lengths included with the A10?

The wideband A10-RX receiver can tune across the UHF range from 470 MHz to 694 MHz (up to 608 MHz for U.S. models). The ¼ wave monopole antennas provided with the transmitter and receiver operate efficiently over a relatively narrow frequency band. Several lengths of antenna are included with the transmitter and receiver. For best RF performance, use the length that corresponds to the frequency used.

What is special about the transmitter’s microphone preamp?

The A10-TX audio input is unique. It includes a standard unbalanced lavalier-type input like most wireless transmitters, but it also includes a low-noise, studio-grade, balanced, mic preamp with 12 or 48 V phantom power, just like the preamps on high-performance mixers and recorders. This topology is altogether unique from older designs of transmitters which accept balanced mics on their unbalanced inputs.

This is crucial because the most important microphone preamplifier in the signal chain is the first one the microphone passes through. The first preamp is the most critical to overall sound quality. A great microphone preamp on a mixer or recorder is meaningless if the wireless transmitter’s preamp is subpar.

Why do I need a balanced input on a transmitter?

The balanced, phantom-powered input is great for boom-mounted microphones. The best RF transmission, mixers, and recorders are not as effective if a microphone is connected to an inferior preamp. A balanced mic should be connected to a proper balanced preamp with phantom power.

Does the balanced input help with RF noise pickup on the mic cable?

Yes. Microphone cables, especially unbalanced connections, are susceptible to picking up RF energy from a transmitter’s antenna and creating “hissing” and “spitting” noises. A major benefit of a balanced input is that it rejects common-mode (interference) signals. The A10-TX balanced input utilizes a large, internal common-mode choke (in addition to other RF filtering) to further block interference.

Do I need a special cable to use the balanced preamp?

There is nothing special about the cable, but it does need to be wired correctly. Wiring diagrams are available in the A10-TX User Guide.

Should you decide to make your own cable and want the RF filter, Sound Devices offers two accessory PC boards that can be soldered onto the female end of the XLR cable.
Learn more about the A-FILTER and the A-FILTER-R for right-angle connectors.

Do I have to worry about 48 V phantom being applied to my lavalier mic?

No. A triple-redundant lockout (software and double-hardware) ensures that phantom voltage is never applied to a lavalier microphone, even if you attempt to change input types in the selection menu. Use the lavalier input without concern.

Can the A10-RX be used in the slot of Sony camcorders with the 15-pin D-type connectors?

Yes, the A10-RX (firmware v3.00+) in conjunction with the A-15PIN cradle can be slotted directly into compatible Sony camcorders. When used in the A-15PIN cradle, the A10-RX outputs two channel digital AES audio internally through the 15-pin internal socket in the camcorder. The A10-RX does not require any additional external cables. Learn more about the A-15PIN.

What are User Groups?

The User Groups feature allows for easy, intuitive naming of specific frequencies for each A10 transmitter used on set, and grouped together for faster tuning. The operator of an A10 receiver may then easily switch between transmitters by choosing alphanumeric names, such as “Jack” and “Jill”, instead of having to remember and manually tune to different, specific numerical frequencies.

For instance, a producer or director may want to monitor several different actors’ wireless transmitters. Rather than having to keep a list of all of their frequencies, each transmitter may be pre-assigned a frequency and given an actor’s name. Then only those pre-assigned frequencies that have been named will be available as possible options for tuning. See the A10-TX and A10-RX User Guide for more information.

The A10-RX firmware is updated via the Mic2Wav computer application or via the Sound Devices 688, 833, 888, or Scorpio with the SL-2 or SL-6. The A10-RX connects to the computer via USB with the A10-RX-XLR, A10-RACK, A-RXMON, or A-15PIN. Complete instructions for firmware updating are available in the A10-RX User Guide.

The A10 transmits digital data between transmitter and receiver. To “fit” audio in the allowed spectrum and have the extreme low latency of 2 ms, the data rate needed to be carefully considered. Data rate is a product of sampling rate and bit depth. A sampling rate of 44.1 kHz was chosen to save precious samples while continuing to allow for full 20 Hz to 20 kHz audio bandwidth.

Because the A10 system operates at 44.1 kHz, the A10-RX outputs 44.1 kHz at its AES digital output. When connected to devices running at 48 kHz with SRCs (sampling rate converters) at their inputs, such as Sound Devices 633, 688, 788T, and 8-Series or the Aaton Cantar, the connection is directly compatible.

When connected to devices without SRC’s, such as a Sound Devices 744T, or when connecting multiple A10-RX receivers to a mixer without SRCs, use the analog balanced line-level setting. The A10-TX does not accept external Word Clock.

Can the A10-TX be used as a timecode generator?

The A10-TX has a built-in, high-precision timecode clock. Its clock can be set from either its own time-of-day clock or jammed from an external LTC timecode source via the 3-pin LEMO connector. After the A10-TX is jammed, it maintains precise timecode.

The A10-TX can also output its timecode. While the A10-TX can be used for periodic jamming of external devices from its timecode clock it is not designed for continuous timecode output. The A10-TX is not a substitute for dedicated sync boxes. Timecode input and output is active only when the timecode menu is displayed.

Why does my A10 System heat up?

Both the A10 transmitter and receiver are designed to operate over a very wide temperature envelope and will warm up, especially in ambient temperatures in excess of 25 degrees C. Many systems are being used in hot climates around the world. Customer reports of warm transmitters are often due to the use of NiMH batteries in the transmitter, which produce heat when in use. When lithium batteries are used, this heating effect is not much more than that of an analog transmitter. Thus, we recommend using lithium batteries in the A10 Digital Wireless System.

When possible allow for airflow to reach the A10-RX. It is not recommended to put the receiver in a tightly enclosed, insulated container.

Is the 1010 System discontinued?

Can I use TX1010 transmitters with the new A10-RX receiver?

Yes. The digital modulation of the 1010 system and the new A10 system is compatible and transmitters and receivers can be used interchangeably.

Does the A10 System work with other manufacturer’s transmitters and receivers?

No. The digital audio and digital RF modulation topology on the A10 System is proprietary and does not work with transmitters and receivers from other manufacturers.

Request service from one of our authorized technicians.
Request a Repair

Have a question for our support team? We are here to help.
Contact Support

A10 System Declaration of Conformity

Download the A10-TX Remote App for Android and/or iOS from the Google Play Store and the Apple App Store.

The available iOS and Android app offers wireless remote control of the A10-TX and A10-TX-US transmitter.

Controls and indicators include:

Production sound mixer Paul Munro discusses his feature film work and how his A20-Minis were essential to his workflow on Captain Marvel 2.

“Autumn” was shot as an improvised, live-to-air event between The Third Day “Summer” and “Winter” miniseries. SoundCatchers’ George Precious and Paul Cameron served as location sound mixers and relied on the flexibility of the Scorpio and A10 Digital Wireless System to get the job done.

Jonathan Wyatt, AMPS, relied solely on the Audio Limited A10 System to capture the finer points of dialogue for BBC and HBO’s hit series “Gentleman Jack.”

Specialist sound team Bastwick Audio used their versatile A10 Digital Wireless System on-talent, on-boom, as wireless hops, and as remote recorders during a seven-day trek to the peak of Kilimanjaro.

Location sound recordist Mat Adams trusts the durability and reliability of his 688, SL-6 and A10 Digital Wireless System for on-location, remote and complex unscripted television productions.