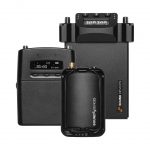 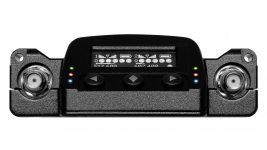 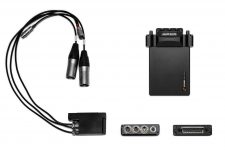 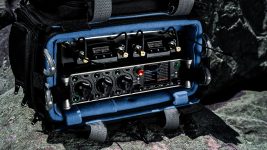 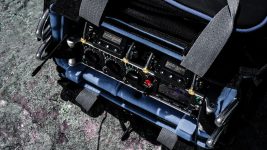 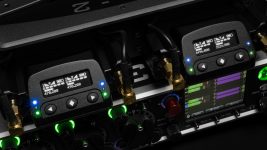 SpectraBand technology delivers a tuning range of 470 – 1525 MHz in a single unit – an industry first. Experience ultimate flexibility as you find open spectrum away from the crowded UHF TV band.

The A20-RX’s AutoAssign scans a tuning band and selects available frequencies for you – perfect for any fast-paced shoot. Meanwhile, brick-wall SAW filters eliminate out-of-band interference so you can get the best RF performance possible. Enjoy immunity from nearby IFB or camera hop transmitters without the need for external filters or extra cabling.

No, while the A10-TX will still work wonderfully with either the A10-RX or the A20-RX, it is based on older circuitry which cannot transmit with the wider tuning range.

Yes, this is a significant hardware update which requires a new RF board inside the A10-RX. You can upgrade the hardware of your receiver to the A20-RX for $995 USD or for $750 if you purchased your A10-RX within the last 12 months or an A20-Mini since June 1st. The upgrade program lasts until the end of 2022. Start your upgrade at service.sounddevices.com.

Is SL-2, SL-6, and A10-Rack antenna distribution compatible with SpectraBand?

With which receiver is the A20-Mini compatible?

Can the A20-RX’s two channels be set to separate tuning bands?

Both channels must fall within the same tuning band, as the brick-wall filtering comes before any of the active circuitry for best performance. With the A20’s tight intermod-free channel spacing of 400 kHz and SpectraBand’s 20+ tuning bands, there are many frequencies to choose from – typically 60 frequencies per band.

Can the A20-Mini use balanced microphones?

The A20-Mini is specially designed for small size, and supports lav mics only. For using 48V phantom, balanced mics or balanced line sources, please use the A10-TX.

What is the Bluetooth range on the A20-Mini?

Many things in the environment can affect Bluetooth range, but line-of-sight you can typically expect up to 40 feet (13 meters).

What’s the difference between the RSSI and Q-meter?

The RSSI is a visual representation of how well the antennas on the receiver are picking up a wireless microphone. The Q-meter displays the difference between the signal from the transmitter and any interference. Use the Q-meter to confidently choose frequencies which will give the best performance and range. Learn more about the Q-meter at sounddevices.com/quality-meter

What’s the difference between Standard and Long Range Modulation?

Can the A20-Mini use both 2-wire and 3-wire lav microphones?

Yes, unlike the A10-TX which only supported lavs which are 2-wire, the A20-Mini also supports 3-wire lavs such as the Schoeps CMR.

On the A20-Remote app, I notice a “License” icon near the frequency I have set. What is this?

This icon is a friendly reminder that you legally need a license from your local government to operate on this frequency.

I notice that the green audio LED glows with audio no matter what the GainForward gain is set to. Why doesn’t the brightness of the LED change?

When is simultaneous record and transmitting available on the A20-Mini?

A20-Mini transmitters purchased in the United States of America do not have a simultaneous record and transmit (REC + RF) mode.

REC + RF mode is not available on any A20-Mini while operating in the United States.

How robust is the A20-Mini’s plastic chassis?

The A20-Mini’s chassis has an exceptionally high strength-to-weight ratio thanks to its aluminum/high-strength Ultem thermoplastic construction. Additionally, each piece of the chassis is curved in both directions, imparting a very stiff geometry. All together, the chassis feels very light, but extremely solid.

Why is the A20-Mini branded as Sound Devices and not Audio Ltd?

Sound Devices and Audio Ltd got married back in 2018. Though we both speak (more or less) the same language, we live in two different houses. Now you get both wonderful groups under one simple name, Sound Devices.

How many groups can I make in A20-Remote?

You can make one custom group with any transmitters you select. There is also an automatically-created “All Transmitters” group.

Is the Bluetooth connection being used to remotely control the gain of the transmitter?

With GainForward’s high dynamic range, does this mean I don’t need to have low-sensitivity lavs anymore such as the Sanken COS-11 red dot?

Can I use a non-Sound Devices mixer and get the benefits of GainForward?

I’m using an A20-Mini without an SL-2 or SL-6. Can I still get the benefits of GainForward?

I’m using an A10-Rack with my 8-Series. Can I still get the benefits of GainForward?

Yes, you can still get all the benefits of GainForward in A10-Rack. Connect to the A10-Rack via Dante or AES. Set the A20-RX/A10-RX to unity gain (0 dB), then dynamically adjust the received signal level using the digital trim gain on the mixer/recorder. Full dynamic range, and zero lag level adjustments.

Can I come out of the A20-RX/A10-RX via the analog output and still get the benefits of the GainForward architecture?

Yes, provided you use the gain control provided on the receiver itself.

Does the AES output of the A10-RX and A20-RX have enough dynamic range for GainForward?

Yes, AES can transport 144 dB of the audio’s dynamic range, so it is definitely sufficient for the >130 dB of dynamic range of the lav microphone.

What’s the best practice for using A20-RX with an IFB or Camera Hop transmitter nearby?

It’s always best practice to separate your transmit and receive antennas as much as is practical. A20-RX includes robust front end filtering designed to minimize interference from strong nearby signals. We recommend placing an IFB or Camera Hop a minimum of 12 MHz outside of the tuning band. For example, if your A20-RX is set to the 562-588 MHz tuning band, place your IFB or Camera hop below 550 MHz or above 600 MHz.

What are the advantages to SpectraBand tuning?

Based on feedback from our user community, we designed SpectraBand to address two common problems, crowded RF spectrum and strong interfering signals. First, the 470-1525 MHz tuning range is unprecedented in a wireless microphone receiver.  This opens up additional spectrum that is unavailable in other products. It eliminates the need for multiple pieces of hardware to cover these various frequency ranges. Second, we include robust front end filtering that minimizes interference from strong nearby signals. This allows you to work in closer proximity

Can I use the A-TA3 DC power inputs as a power pass through?

We do not recommend using the 4-pin Hirose and TA4 DC power connections to pass power through the A-TA3. Doing so could trip an internal fuse and disconnect power.

What is the A20-Mini battery run time when using the Sony NP-BX1 battery?

Up to 9 hours with the A20-BatteryDoubler accessory and 4.5 hours with a single NP-BX1.

What is the size of an A20-Mini with an A20-BatteryDoubler installed?

With the A20-BatteryDoubler fitted, the A20-Mini is still super-compact. Its height/width are unchanged, and depth is increased by 7 mm.

Is it possible to easily swap the A20-Battery Doubler with the standard A20-Mini battery door?

Yes. Super-easy. If you know how to use a screwdriver, you can swap between them very quickly.

Yes. You can charge up to four A20-Minis with A20-BatteryDoubler fitted. If you have an early PowerStation-8M, it can easily be modified for free to accommodate the

Although it will comfortably slide into the holster, the strap is not long enough to velcro down. There are a number of 3rd parties that provide alternative solutions.