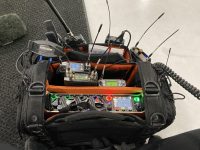 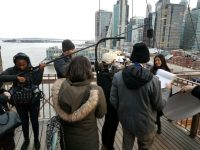 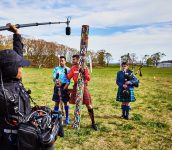 Tomlinson developed an interest in production sound after working as a PA and 2nd AC.

“I started working on film sets as a PA & 2nd AC while doing some sound design work for indie projects and working at PSAV all part time for about a year. I started to develop an interest in production sound. After doing research and speaking to some mixers that I knew, I decided to bite the bullet, quit my part-time job at PSAV and dive into production sound full time. The initial plan was to do production & post production sound equally but production sound basically took on a life of its own.”

“I’ve always had a love for audio. Like most people my love started with music although I do not play an instrument, I always just wanted to be around the making of magic. My love for music eventually evolved into sound for film during my time at Full Sail.”

“Invictus Sound Factory is my dream. Currently we offer services in production sound, sound design, dialogue editing and re-record mixing. I have a roster of contractors that I work with. I wanted to offer a full audio service because I share a huge love for both the production & post side of sound. I thought that if ISF can offer both services it would be my way of staying connected to both sides. The end goal for ISF is to not only be a place of employment but a place where people can come to learn, grow and evolve in the field of audio.”

“I love my 888 and the option to send multiple different mix buses where they need to go on set. The built-in timecode battery is also nice in terms of holding timecode longer. With SD-Remote I like the ability to control my track arms and change track names on the 8-Series. The fader mix control is pretty cool and the option to turn it off or on is nice.  I like how you can edit the metadata of each take within the app and the new feature to be able to play back each take from the track list is nice! The new channel features are awesome and to be able to now adjust gain, trim, mute and even pan is a very nice added feature.”

“The major reason I really like the app is because having Binaural Foraminal Stenosis the last thing that I want to do is look down for long periods of time, and I definitely don’t want to develop ‘tech neck’ as they call it. I appreciate the app a lot in terms of it saving my neck from having to look down for long periods of time when bag mixing.  It’s nice to be able to have the app on my phone at a decent eye length to be able to do things like entering metadata and notes. The app is definitely saves time in my workflow when it comes to adding notes, or changing track and scene names in a hurry.”

“My favorite project would have to be a LEGO show called Rebrickulous. Every episode was different. It offered a challenge and allowed me to expand in my skills and knowledge especially when it came to underwater recording. It was a lot of fun.”

“The most challenging project that I’ve worked on so far had to be this mini doc shoot I just did. It was challenging because I was understaffed and the lack of communication. It started off as a simple round table discussion with four or five people, IFB’s for contact, and timecode. By the day of the shoot we jumped to ten on camera talent, five cameras, in-ear IFB’s for talent, and some other equipment. While I was away recording single interviews in another room, the master shot got changed completely. I did not find that out until five minutes before we were supposed to start filming so I am frantically running around to change my entire setup. Thankfully I did get some help, but I was not happy. I did however take it as a learning opportunity for myself.”