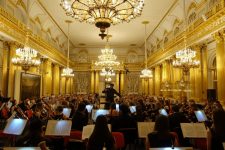 A musician himself, Alekseev believes capturing sound is as important as creating it.

“Sound recording has been my constant passion since childhood: it started with recording compact cassettes. I then graduated from music school as a violinist. After studying at the conservatory, I worked at the Mariinsky Theater with maestro Valery Gergiev as an engineer. We created the Mariinsky label and collaborated with great producers such as James Mallinson.”

“Recording and mixing an orchestra is very different from recording music from other genres.  You need to have a musical education in order to properly record and mix orchestral recordings.”

The MixPre-10M has served as a valuable tool for remote recordings and has integrated seamlessly into Boris’ workflow.

“I use the MixPre-10M to record small ensembles. The MixPre has good quality processing, which allows you to mix a broadcast-ready sound live in real time: all thanks to this compact device. I like it! Having autonomous operation of the device for many hours without an electrical network lets me record no matter the venue.”

Capturing more than 800 years of tradition requires attention to detail and knowledge of the score.

“For me, the sound capture for Baroque, Renaissance and Modernism is not much different.  The main difference is in mixing this music. Balance between instruments, degree of reverb. With the MixPre-10M I was able to record 4 concerts.  Records of the orchestra with and without soloists. I recorded at the State Hermitage and the Konstantinovsky Palace. [Sound Devices] products are great for recording music, live broadcasts, and movies.”

You can find more information and sample recordings from Alekseev’s Classic Multimedia Group on their website.