LOS ANGELES, CA – With a family in theater and radio broadcasting, Brendan Beebe, CAS, grew up in a house full of recording equipment and was destined for a career in the audio industry. “I grew up with recording gear and drama in my house.” 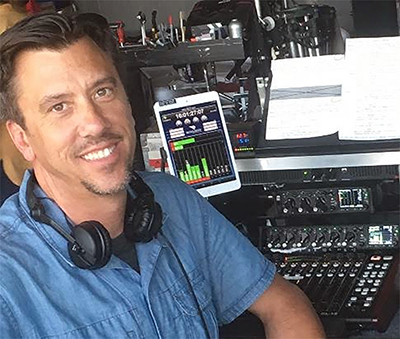 His journey began as a delivery driver for an audio rental supply store. “I was delivering some of the best equipment to the biggest shows in town to the top professionals in the world,” he says. “I stayed there for three years, learned all of the equipment, and then started my freelance career working as a sound utility for some of the biggest features in the 90s, Titanic being one of them.” The box-office blockbuster proved to be a big break for Beebe. “It all happened really fast. I was pretty much in the firing zone where I was trusted to handle all the communications for about six different camera operators, cranes, and there was a whole choreography of communications for filming the scenes.”

Since then, he has worked as a boom operator and production sound mixer, spending long hours behind the scenes of countless hit television series like House, The X Factor, ER, Scandal, and American Horror Story, which earned him two Cinema Audio Society (CAS) nominations. Having been exposed to a variety of audio products over his career, he recalls it was back in the early 2000s, on the set of the long-running reality show American Idol, when he first heard of Sound Devices.

“I discovered the 442,” he says. “Someone else was using it, and I jumped on it. I bought one right away, my first purchase. It was the best sounding bag mixer of its time.”

As he gained experience over the years, one thing remained the same. He stuck with Sound Devices, owning three 788Ts, a CL-8, a CL-9, and a 664. His gear now includes two 633s, a 688 mixer/recorder with a CL-12 Alaia™ linear fader controller, and the Wingman wireless interface application, running on an iOS-based mobile device. 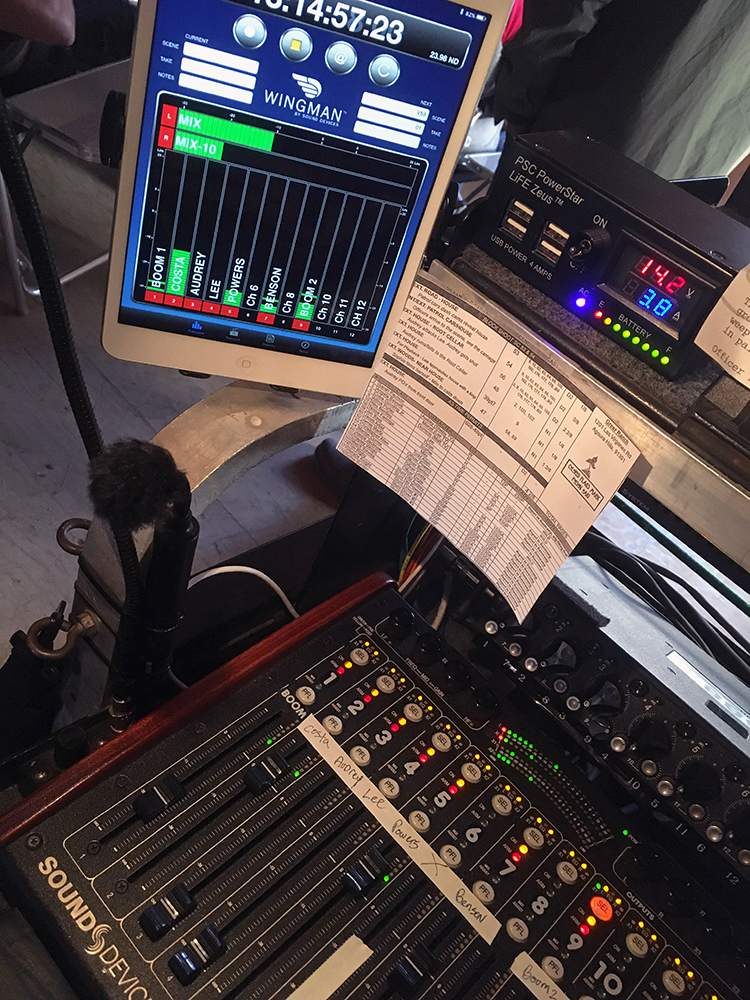 Whether working on a scripted drama or unscripted reality shows, Beebe turns to his second 633 in a bag when he needs mobility in a hurry, and he credits the interchangeable nature of the 6-Series product line for making it possible.

“Being in reality TV has helped me become a bag mixer very quickly. I carry a full bag rig on my cart…. Within probably one minute, I can leave the cart and be mobile, which I had to do this year on a TV show for HBO called Big Little Lies,” Beebe says. “We were in a house filming all day, and the director liked the sunset, so they wanted everyone out on the beach. Right now. The cameras never cut. They started running out of the house. I always have CF cards loaded and ready. I just turned the 633 on, put the SD card in, jammed timecode from my 688, ran down to the beach, and we filmed for an hour and a half.” 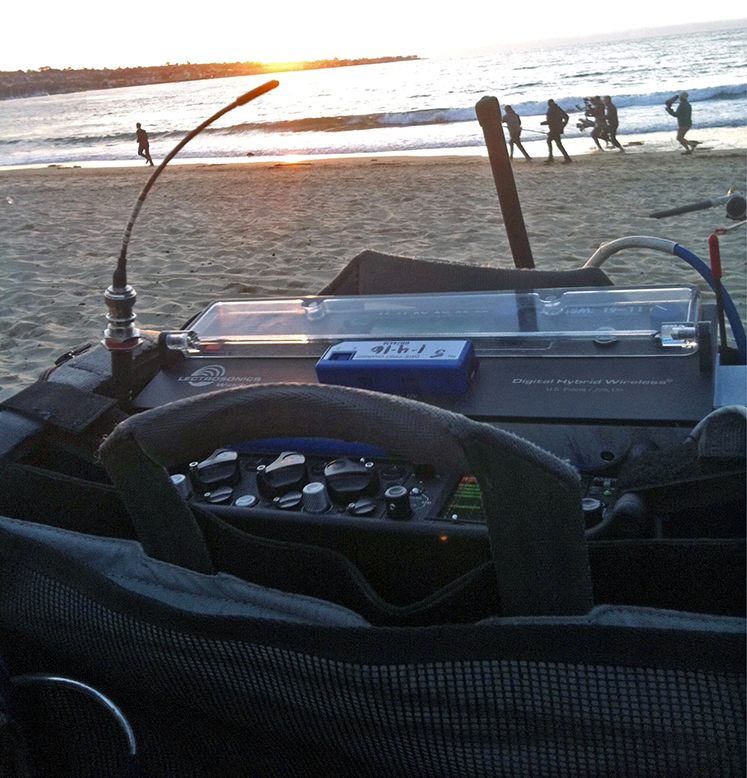 Beebe adds, “They’re faster, more forgiving recorders that are capable of doing multi-tracks. The power-up options, where you can start recording within a second, the QuickBoot™ is incredible. And the power efficiency—right now I can run my cart for 20 hours on batteries alone.”

Also part of the Sound Devices 6-Series product line, the 688 is a 12-input mixer with an integrated 16-track recorder, while the 633 is a smaller, compact 6-input mixer with 10-track recorder. Both record polyphonic or monophonic broadcast WAV files or timecode-stamped MP3 files to SD or CompactFlash cards. Both are compatible with the CL-12, and both can be monitored and controlled from the Wingman app.

“I’m using Wingman on an iPad mini for the larger display and to create sound reports and send them off to my cell phone when in the field. It’s a great extension of the 688,” Beebe says, but he admits the CL-12 Alaia is the accessory he was most eager to have. “When the CL-12 Alaia came out with the P&G faders, that was exactly what I was looking for, waiting for, and asking for. I needed a separate slate mic input, and the P&G faders were just the icing on the cake that sold me on it right away. It’s such a good feel, having all the menus at my fingertips on the board. With the amazing analog limiters on the 688, it’s just a powerhouse combination.”

For Beebe who just wrapped up work on another season of American Horror Story, the limiters are the most impressive and helpful feature found on a 6-Series mixer/recorder, especially when dynamic personalities are mic’d up.

“Working with an actor like Lady Gaga, you don’t know if she’s going to scream or whisper at any second,” Beebe says, “and these (Sound Devices) recorders have such fantastic limiters that I haven’t experienced clipping in years.”

While Beebe uses the 688 predominantly as his cart-based mixer/recorder, he recently utilized its portability on the set of American Horror Story. 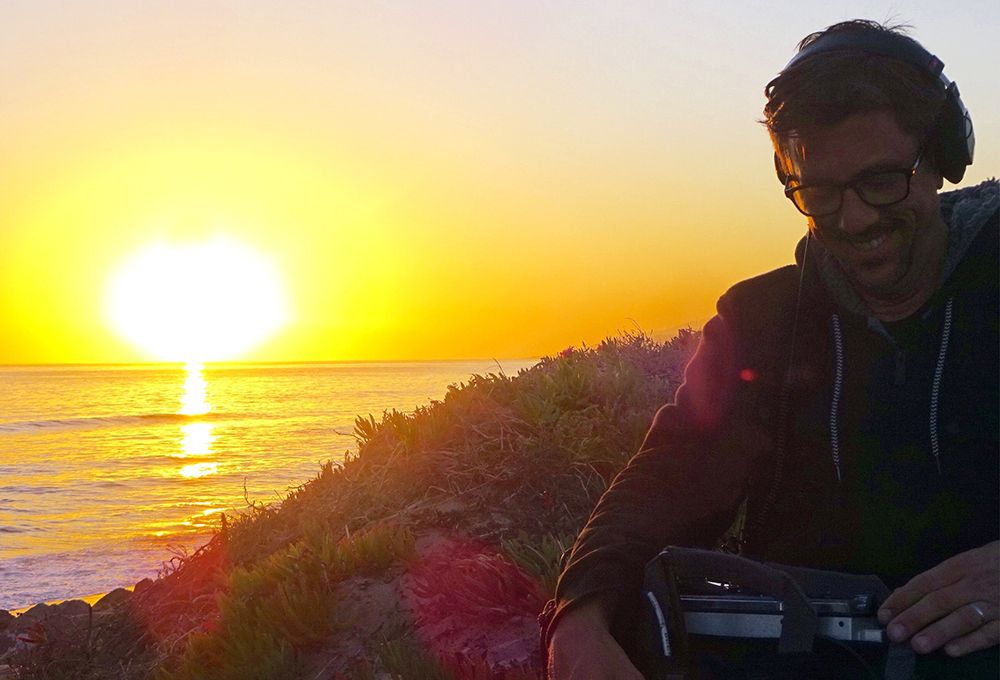 “The producers asked me to actually be in the show because they were going to shoot documentary-style of a show being made. So I’m well featured in episode 6 of season 6 wearing the 688,” Beebe says with a chuckle. “I had 9 ISO tracks and two mix tracks in the bag as I’m running around on camera, acting, and we had zero looping…. The 688 allowed me to get all of those tracks and do everything I needed with eight actors in a scene, including me. It’s so efficient, and the limiters are so forgiving that it’s just a pleasure to work with.”

Beebe has also finished production on G.L.O.W., an upcoming American comedy-drama series for Netflix, for which his trusted Sound Devices gear was put to the test once again on set, but he also admits he plans to expand his setup this year to include the SL-6, a powering and wireless accessory for the 688. “I think Sound Devices (gear) has evolved the same way that television has evolved production-wise. So, I’m excited for what the future holds from Sound Devices because it just gets better.”