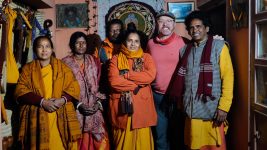 Sound Devices: Tell us about the project!

Otherlands: A Global Music Exploration was a nine month journey through six countries with my family, searching out local music masters with roots in their traditions for collaboration and inspiration. These on-location meetings are documented with film, audio, story, and photography. The project is entirely self produced and has resulted so far with a 25-episode series of short films, a record titled Otherlands:ONE, journals, workshops, and hundreds of photos. I’m an American five string fiddler with roots in bluegrass and jazz. Over the years I’ve had the fortune to travel abroad for music and those experiences have always been very special, so this project feels like a very natural extension of the things in life that are meaningful to me.

SD: Many of these instruments and music traditions use different tunings, scales, time signatures and key centers. How did you bridge that gap?

I made location inspiration playlists for each country. Prior to heading to a new location, I started researching their traditionally-based music online, asked friends for recommendations, and looked for examples on Spotify. Anything that caught my attention would end up in a playlist for that country, which would continue to grow throughout my time there as I learned more. To get my ears tuned up while in the country, I only listened to that specific playlist. Sometimes I played along, and sometimes I explored concepts I was reading about, or even learning about once I started meeting with people. Whenever I struggled during a collaboration, the other musicians would help me out. There are a few memorable times when I was sent a recording prior to meeting, an idea of a piece we’d explore, and I learned it without knowing where the actual downbeat was. It was a rude awakening when meeting to learn that I had chosen the incorrect downbeat and needed to recenter my rhythm, often by just one eighth note.

SD: How many projects were improvised vs rehearsed or arranged ahead of time?

Of the 25 short films, the majority were from a single two to eight hour meeting. When first imagining the project, my idea was to meet twice—once to brainstorm/share, and the other to record. Soon into the project, I realized that was a lot to ask in terms of coordination between my family traveling, musicians gigging and teaching, and finding a location. If I knew time was going to be short, we might throw ideas around prior, or I would mentally prepare a “music plan B,” but first I’d see how the time together unfolded. The main rehearsed meetings were in Finland and the reason was the original Coronavirus lockdown. We made it to the country less than 36 hours before the borders closed, so where we were staying was where we were staying. This meant that I made music on multiple occasions with the same people.

SD: How did the MixPre-6 help on the trip?

I chose the MixPre-6 for the quality of preamps, analog limiters, and portability. It didn’t let me down. I loved recording without a laptop out for any of the sessions. Since I was engineering while playing, the MixPre-6’s size meant I could have it near me at all times, and the channel ring lights were very easy to glance at to make sure everything was okay—often during takes. I never worried about electricity since I could power it with a USB-C power bank, and I loved that I could leave it recording for long stretches of time, in contrast to a couple of my cameras. The only time I used my laptop was for mixing and importing the files was a breeze.

SD: What gear did you bring with you?

This was my first time putting a mobile rig together. Other than keeping an eye on the cost, the two most important criteria were being flexible for ever changing situations and fitting everything in one Pelican case and my backpack. I basically set myself up to be self-contained, with the exception of mic stands which most musicians have access to them. For audio gear I brought the Sound Devices MixPre-6, a range of Shure mics like the KSM44, KSM141 and Beta 181 among others. I also brought a DPA 4099 and a Rode Wireless Go.

SD: What was the most challenging project to set up and mic?

I think my most challenging setup was in the village of Paruldanga in West Bengal, India, at the home of Rina & Dibakar Das Baul. In short, the space was very cozy and dimly lit and our language barrier was significant.

During the late afternoon, we sat around in their front entry space and played a bit, with only the GoPro to capture. After a couple hours of finding ways to share and explain our traditions, I noticed the atmosphere changing. Members of their local community were beginning to arrive and sit, as if preparing for a concert. I knew that we planned to play music in the evening and was starting to understand what that meant. Bits of music and conversation were happening all around me and nothing was set up. I didn’t even know what the group was going to be, and it ended up more musicians  than I was used to recording, the space was tight, the sun had gone down, there was one lightbulb, we were sitting on the floor. I raced to throw out mics. There were no mic stands so I had to improvise: large diaphragm condenser to capture lead vocal, duggi, and ektara all played by Rina on a Gorillapod; small diaphragm condenser on mini tripod for the dotara; Beta181 w/ super cardioid capsule on the floor near the bass side of the shree khol; DPA4099 on my fiddle; and an MV88+ on the room. I had no mics left for the manjira but hoped it would be captured by others, and Dibakar (dotara) also wore ankle bells called ghungharu which are pretty much on every mic. I threw up a couple of lights, using other Gorillapods to attach them to the screen door. But I kept them at reduced power, afraid to affect the lovely atmosphere that was developing, while knowing that my gear is not great in low light. Folks kept playing while others filled the other end of the small room to watch and listen. I could tell the evening music was starting, even as I was still setting up. I remember their instruments were tuned approximately 1/2 step lower than standard so after getting quick levels, I turned my channel off, and attempted to quietly match my fiddle to them. The first song had already started. I was rolling. And then I was lost in a nearly 15 minute meditative musical experience, and that first song ended up a project feature, “Aye Nagari.” I hadn’t even had time to put on the new kurta Dibakar helped me pick out that afternoon at a market!

SD: What was your approach for micing all of these different instruments?

Much of my micing approach had to do with the circumstances of the on-location recording and what sorts of mic stands became available. For flexibility, I bought adapters that allowed me to use tripods as mic stands and also had a Shure A75 clip that came in very handy. I had a good variety of mics for different types of sources and would ask the musicians how they liked their instruments captured. If I could reduce the visual impact of the mics in the shot, I would, but it wasn’t a big priority since these were approached as live collaborations rather than a music video to be dubbed later. In one case we used a fireplace tools holder as a mic stand, and in another we used a small tree!

SD: What was your favorite or most eye-opening collaboration?

A pivotal collaboration for me was with percussionist and khanjira master Bangalore Amrit. He comes from the Carnatic (South Indian Classical) tradition and has an incredibly deep rhythmic understanding. All previous collaborations involved another melodic player and now I would need to carry that role. I didn’t know what we might do so I mentally prepared a traditional American fiddle tune that we could jam on. Amrit taught me about his instrument and showed me a Carnatic rhythmic scale concept. Mentally it made sense, but in practice was a whole different beast. In these situations I try to take something I don’t know and apply it to something I know well—hence an American fiddle tune, with it’s melody and rhythm twisted through five time signatures. It was really challenging for me and I often felt defeated, needing to stop—or being politely stopped—to correct. Amrit was extremely generous and supportive through it all. In addition to the musical challenge, we were on a rooftop in India during the day, one of my cameras had overheated and shut down, there was construction going on down the street, and I was hoping that Amrit was getting something out of all this. By the end of the day, we finally got through our different versions of the tune and I was mentally and emotionally spent. All previous videos had resulted in more of an arranged musical piece, but I didn’t have that here and didn’t know what to do. However, it was this collaboration that really helped me remember why I was doing this project: to share, learn, challenge, inspire, and connect—and in all these ways it was a huge success. So for the video, I decided to show the process and the struggle. I’m happy to report that I’ve been practicing this tune and concept since then and it’s opened up new thinking for me. And Amrit and I are still in touch, talking about how and when we will get to play together again—so, I guess he enjoyed himself too.