Oscar® nominated sound mixer switches to Sound Devices 6-Series mixer/recorders (688,664 and 633) to overcome intense production and environmental challenges on location for films – The Mountain Between Us and The Revenant.

A Career in Audio

WINNIPEG, MANITOBA, CANADA – Chris Duesterdiek, CAS has had sound running through his veins from an early age. Starting with a job in radio in his native city of Winnipeg when he was 17, Duesterdiek has taken every opportunity to keep learning, both from technical practice and from veteran sound mixers willing to share their insight.

“Sound was always a bit of a natural curiosity for me,” he says. “The basics you learn before you get into film sound still apply… Understanding signal flow, pickup patterns of microphones, gain structure, and how to record good sound from a source without over modulating.”

After a brief stint as a musician and live sound mixer for music festivals and theater companies, his career progression into production sound mixing for television and feature film was a logical next step. Fast forward over 20 years in the film industry, with several TV series and movies like Snow Walker, The Interview, The Company You Keep, and Night at the Museum 3 under his belt, Duesterdiek got a call for the Oscar-winning film The Revenant. Duesterdiek had become familiar with a variety of audio recorders for his projects over the years. For The Revenant, he knew that a gear upgrade would be necessary to capture audio for several of the scenes, which would feature nine characters talking.

“I wanted to have wireless mics on nine characters, but I also wanted to have the boom and potentially room for either a couple plants or an MS mic for atmosphere 100-feet off in the bush in the other direction.” When he started looking for the recorder that would serve this job best, he noticed that most of his peers were using Sound Devices, a brand of equipment he had not used up to that point. After a trip to his local audio shop, Duesterdiek decided on the Sound Devices 664, an analog 12-input mixer with integrated 16-track recorder.

For the movie, Duesterdiek planned on using his cart rig as his main setup, with a bag rig prepped that he could use as needed, every now and then. Once on set, however, he quickly realized that his original plans were not going to work. “When I got to set and started, it became obvious that I couldn’t get the cart anywhere. We were crossing rivers, doing 360 degree shots where I had to be mobile and hide behind trees or crouch behind bushes, and there was no way to do it other than to be portable.” 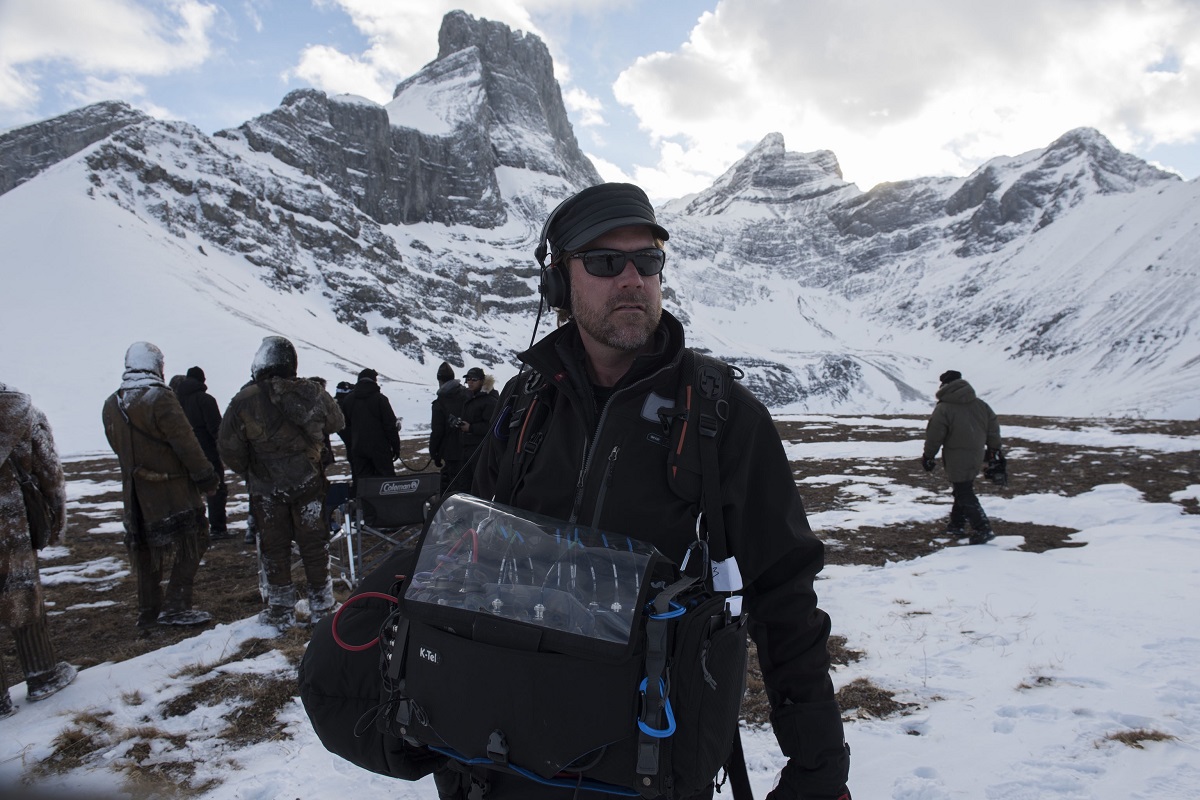 In addition to the 664 in his bag, Duesterdiek used Lectrosonics 411 receivers—opting for more range above comfort. Though his bag was heavy, the receivers allowed him to get further away and to hide out from the shot. For mics, his team used two Schoeps CMIT 5U shotgun mics for double booming, as well as a pair of Schoeps MK41 for booming and plants. Whenever that those were too high profile or large, he also had a few Sanken CUB (01)’s on hand. The Sanken COS11s were the preferred choice for lavs, and finally he used both a Pearl MS8 microphone and an H2-Pro 7.1 surround sound microphone system for ambiance and atmosphere.

After the conclusion of filming, Duesterdiek spoke about the 664 and his experience as a first-time Sound Devices user. “Sound Devices equipment worked flawlessly. It was easy for me to learn; I basically took it out the box and started working with it and did the movie. And it performed great. We spent nine months in nature. We didn’t do a single studio day. Every day was out in the elements. We got out there before sunrise and wrapped after sunset…and it worked in the cold, it worked in the moisture, it worked in the dust and the wind…. Yeah, I was quite happy with the 664. Fantastic first experience.”

More Gear & Automixing for The Mountain Between Us

Based on such positive results, when it came time for Duesterdiek to upgrade his kit again, he once more turned to Sound Devices. With so much location work for feature films, he wanted to stay mobile while still having the option to work from a cart. So, he moved his 664 to a backup, and upgraded the primary recorder on his cart to the 688 mixer/recorder alongside the CL-12 Alaia™ linear fader controller.

“I also added a 633 for my bag kit because with the six inputs on it, that’s enough tracks for most bag work. That allowed me to have all three of the 6-Series mixer/recorders, and I can go cart to bag on any given setup.” Duesterdiek finds using the entire 6-Series family of mixer/recorders and accessories for his workflow makes “everything just that much more seamless when you’re having to go back and forth. I’m really happy with how they work.” 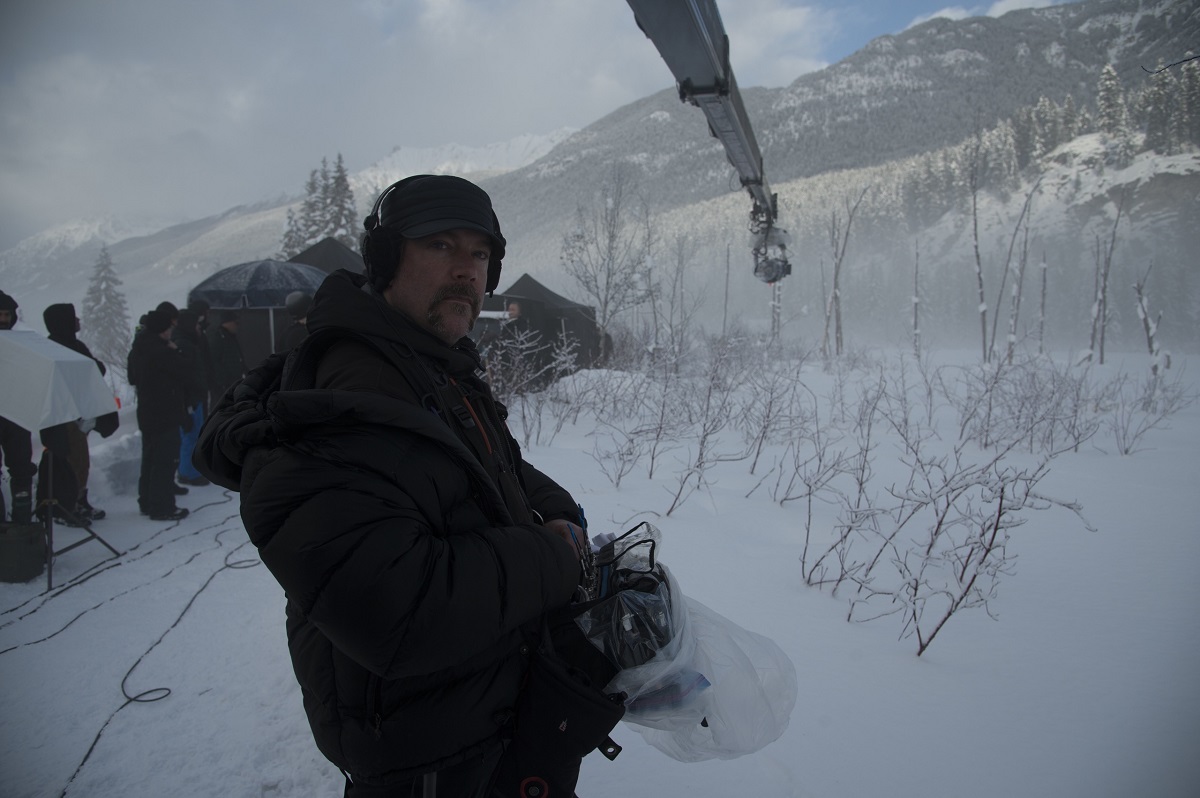 The 633 is a compact digital mixer capable of recording 10 tracks of audio to CompactFlash and SD cards. Like the 664, the 688 digital mixer has 12-inputs and can record 16 tracks of audio. The 633 and 688 also have two-second boot-to-record capability with QuickBoot™ and can protect vital recordings with PowerSafe™, an internal 10-second reserve for safe shutdown in the event of unexpected power loss.

Duesterdiek says powering his gear has never really been an issue for him, even on location. “Although I run with two 7.2 L-type Lithium-Ion batteries, one lasts me a full day, and one NP-1 for all the wireless usually lasts me a full day, so I don’t even have to switch batteries, which is another mind-blowing part of it, because usually in the cold your batteries are a huge issue. I have plenty of batteries on hand, both NP-1s and L-mount, so even in the extreme cold, swapping an NP-1 at lunch is simple and I’m good for the day.”

One invaluable benefit of the 6-Series product line is that both the 688 and 633 have auto-mixing capabilities. They are the first and only portable field production mixer/recorders to include Dugan Speech System™.

Duesterdiek relied on his 688’s Dugan automixing feature when, in a particularly tight scene within the fuselage of a small bush plane for The Mountain Between Us, there was no room for booms. Duesterdiek had to use eight plants for three characters, and turned on automix. “Dugan automix was extremely helpful,” he said, “because it was very intuitive and easy to adjust. At the end of the day, all of the mics sounded like one microphone, which is the goal. Production was happy, and I was happy, and success all around at that point.”

He has also discovered that Dugan automixing has made him a better production sound mixer. “Dugan automixing is making me better,” he said, “and I’m also making the automixer better by manipulating the faders as we go. You think, ‘OK, if it’s picking up a signal and deciding which plant mic to open, and there are several people talking at the same time and so many plants in close proximity…’ I have a map in my head of where they (the plant mics) all are, and I know as they move around where it might focus more on, so I’m taking out the ones I don’t want it to focus on and the automix is helping to deal with what’s left. It’s a really great tool. It’s really helpful.”

Duesterdiek continues to take on challenging opportunities, as he loves to keep learning and growing as a production sound mixer. “I really feel it’s important to keep challenging yourself whether it’s environmentally or technically. I don’t necessarily want to be hanging off the side of a mountain in minus 30 degrees weather; it’s not an easy way to work, but it’s challenging. I know that I’ve done enough outdoor shows where it’s pushed me to see how far I could go and how far the gear could go. I have a good idea of what I can do in these extreme situations. That’s great to get those challenges…. And sometimes you take a gig because it’s technically demanding, and you haven’t been pushed that far before in a technical sense with a show that’s stretching the boundaries, so I’m going to take it to see what I can do with it.” 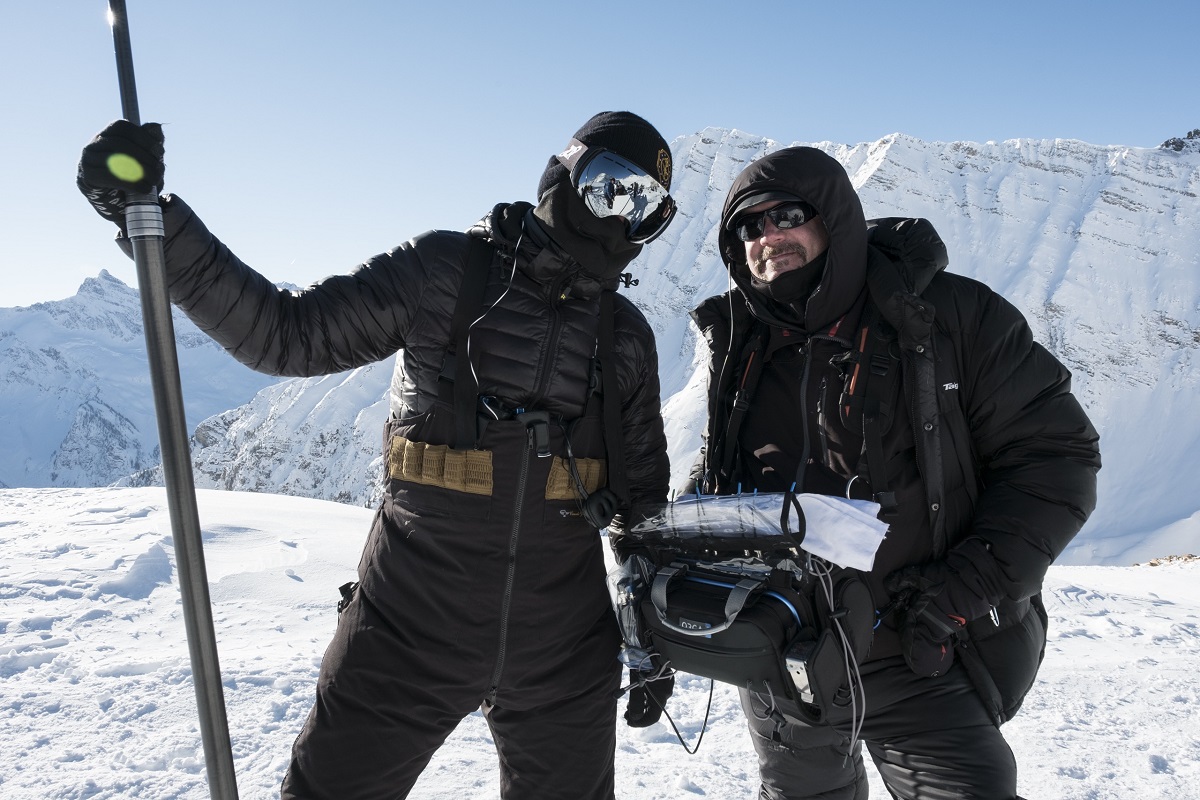 As Duesterdiek continues to work in extreme conditions, he knows he will never be the one to hold up a shoot because of gear failure. “I’m working in these extreme working conditions, and I don’t have to use any heaters. I put it (the 6-Series mixer) in the bag, I strap it on, and it works, the screen works. It’s not slow, and everything is just fine. So I’m very happy with how it’s performed even in under extremely difficult conditions environmentally. As long as I’m not the weakest link in the chain, I feel fine. If it gets so cold that the gear stops working, it’s not going to be mine that stops working first. It will be the cameras. The cameras will die before my gear dies, and that’s always a good thing.

“On a film, they’ll take two hours for a lighting setup, but can’t take 10 seconds for sound. It seems to me, it is all physics, but I know that the speed of light is faster than the speed of sound, yet we’re still faster than light on a film set.”