ANTARCTICA — As a location sound recordist specializing in capturing wildlife and natural history audio, Chris Watson has traveled all over the world, enduring some of the most extreme climates and harshest working conditions on Earth to get compelling sound. For his work on Frozen Planet, the BAFTA award-winning documentary series co-produced by the BBC and the Discovery Channel, he turned to Sound Devices 744T Recorder and MixPre Compact Field Mixer for his portable audio recording needs.

Frozen Planet, presented by Sir David Attenborough, is a seven-part series focusing on life and the environment in the Arctic and Antarctic. In order to document how climate change is affecting landforms such as glaciers and ice shelves, and the extent of sea ice, the series required Watson and the production team to capture a comprehensive record of the natural history in the polar regions.

For his work on Frozen Planet, Watson, who was based at McMurdo Station, the National Science Foundation’s United States Antarctic Program base on Ross Island, located in McMurdo Sound, Antarctica, flew to the South Pole and also worked on the continent’s ice shelf and ice plateau, where it was -47.2 degrees Fahrenheit (-44 degrees Celsius) on some occasions, with a wind chill. Despite being exposed to such extreme cold, Watson’s Sound Devices 744T unit performed flawlessly.

“The reliability of my kit is absolutely paramount, especially when working in such remote locations,” says Watson. “If you go to the South Pole and the equipment doesn't work, you have no way to fix or replace it, and you’ve wasted your time. The construction, portability and reliability of my Sound Devices gear were fantastic. In fact, it was so cold that on several occasions I had to stop before my 744T did.”

For his rig, Watson set up his 744T with a Sound Field ST450, an ambisonic recording instrument. The 744T works directly with ST450, with Watson using all four-line inputs to record the signals in B format. The 744T has a B-format decoder in the headphone amplifiers, which proved especially handy for the Frozen Planet project. Even though Watson was recording to this less common surround sound format, he was able to decode it and listen to a stereo approximation of his recordings. He also recorded in double-mid side (DMS), a surround sound format that uses three microphones and three channels of his 744T to create four or six audio channels in post production.

“The ease of connectivity of the 744T is great,” adds Watson. “When I want to record content, I can burn the files to CompactFlash and the internal hard drive, which gives you the confidence you need when working in these types of places, thousands of miles from any sort of base that your data is secure. I also like the fact that with the 744T you can back up files to an external drive on location as well.”

Sound Devices 744T, a powerful four-track, file-based digital audio recorder, has become a staple in the rigs of many feature film and episodic television sound mixers. The super-compact 744T records and plays back audio to and from its internal hard drive, CompactFlash cards and external FireWire drives, making field recording simple and fast. The 744T reads uncompressed PCM audio at 16 or 24 bits with sample rates between 32 kHz and 192 kHz. Compressed audio recording and playback from 64 kbps to 320 kbps is also supported. 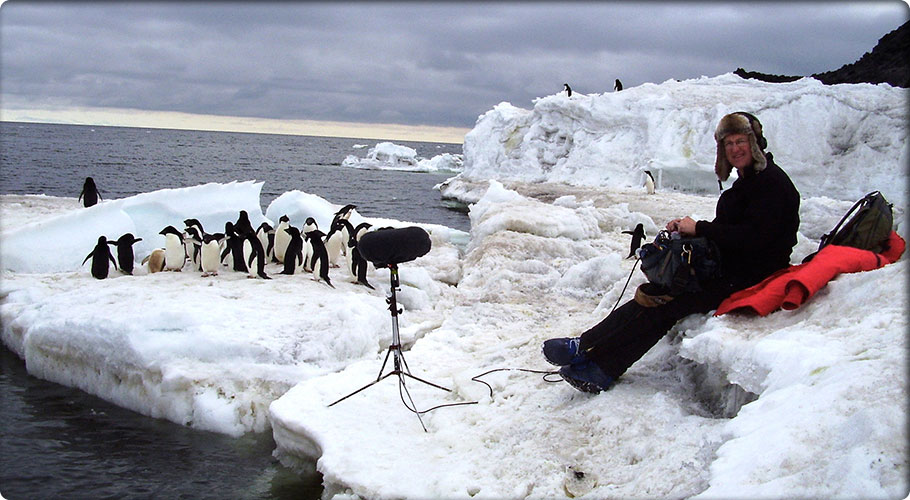 Another key component of Watsons’ rig is the Sound Devices MixPre Compact Field Mixer. While recording pods of Orca whales and Weddell seals under the sea ice, Watson used the preamps on the MixPre independently, feeding the audio into his backup recorder. By using the MixPre as a stereo preamp, he was able to capture these sounds under the sea ice, utilizing the dynamic range of the hydrophones.

“The MixPre has that rich sounding analog quality to it, which I like,” concludes Watson. “It also allows me to get a clean analog front end from the hydrophones, because the signals are so loud. I was actually out about 20 miles off shore and stood on nearly 10 feet of sea ice, and was able to record not only pods of orcas coming up to the sea ice, but also the sounds of the ice shifting and cracking.”