Austin, TX — Twin brothers Erik and Joseph Duemig, who form the Austin-based mix/boom duo known as Twin Sound, are quickly making a name for themselves in the city’s growing film industry. To deliver on the exacting needs of film making, the brothers selected a 664 Production Mixer with CL-6 Input Controller from Sound Devices, specialists in audio and video products for television, film, and live production, for their audio needs.

“Working in the film industry is a unique experience for a young audio freelancer as it is one of the only positions in which the crew member is expected to supply their own gear,” says Erik. “So, crafting our kit has been a major part of our growth, both in Austin and the industry.”

“Our first bag/rig was a Sound Devices 552 mixer and 744T recorder combo that had been given to us by a friend we knew from Columbia College Chicago, where we’d gone to school,” adds Joseph. “She is now in a career outside of filmmaking, so when we ran into her at South by Southwest (SXSW) and she told us the kit was sitting in a storage unit, we asked if we could have it.”

This access to professional equipment allowed the twins to dive straight into the Austin freelance film world, quickly landing them gigs on a handful of independent feature films and shorts. They have also provided audio support for video projects at some of the city’s major music festivals, like SXSW and Austin City Limits. 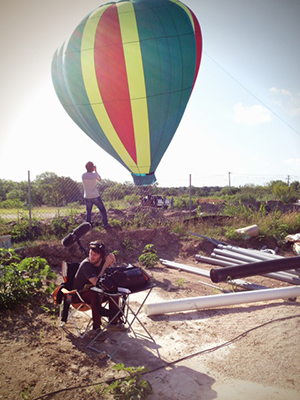 “Once we got the Sound Devices 664, things sort of skyrocketed,” says Joseph. “We would post pictures of us using our gear on an indie feature to social media, and almost immediately we started getting messages from producers or coordinators looking for a local sound team.”

The Web also helped the brothers to foster active and direct relationships with the equipment manufacturers. “One of the things we really like about Sound Devices is the company’s accessibility, especially on social media platforms,” says Erik. “We can reach out to them on sites like JWSound or Facebook, and know that we’ll hear back pretty quickly. The responsiveness of the support team is top-notch. They’re genuinely interested in making our jobs easier, and that’s a cool dynamic.”

Since purchasing the 664 with CL-6 Input Controller roughly one year ago, Twin Sound has used the equipment on four independent features, and today they collectively give Sound Devices four thumbs up. “We really like the internal routing capabilities and were also drawn to the design and interface,” continues Erik. “Setting up the metadata is easy, and the menus and submenus are simple to use and easy to organize. We decided to add the CL-6 accessory because we really liked the large Record and Stop buttons.”

“The sheer number of outputs on the 664 is also a standout feature for us,” adds Joseph. “We have enough flexibility with this single system to send individual signals to the headphones, hopped camera and one signal to me as the wireless boom operator. We also use the AUX sends and talkback intercom during shots. This way, Erik can speak to me without interfering with the take. I like this general flexibility; it feels more like a cart than a portable mixer.”

The 664 features six ultra-low noise, high dynamic range transformer-less preamps that accept mic- or line-level signals and include analog peak limiters, high-pass filters, input trim control and direct outputs on every channel. Direct outputs for input channels 1-6 can be switched to six line inputs (7-12) for a total of 12 inputs. The 664 records up to 16 tracks of 16- or 24-bit broadcast WAV files to SD and/or CompactFlash® cards. All inputs and outputs are individually selectable for recording, enabling the mixer to record up to 12 ISO and four mix tracks. With its dual card slots, the 664 can record WAV or MP3 content to either or both cards simultaneously, with the added ability to assign different tracks to each memory card. For applications requiring fader control of inputs 7-12, the available CL-6 Controller adds six dedicated rotary faders with PFL switches. It also offers additional LED output metering and recording transport controls.