LOS ANGELES — For the past 15 years, Jamie Gambell has been working in production sound. He started out in his native England as a trainee, went on to be a boom operator, and finally a sound mixer. In 2008, Gambell moved to the United States, where he has been living ever since, working primarily on feature films and television productions. Gambell’s most recent projects include The Fosters, a Freeform family drama, and Maron, Marc Maron’s eponymous IFC comedy series.

As a production sound mixer, Gambell sees himself as the conduit between production and post. He is the person on set that helps protect the audio for the director and editors, providing them with a clean and usable collection of tracks that would be difficult to recreate after the fact. In order to capture this dynamic audio he relies on equipment from Sound Devices.

Gambell was first introduced to Sound Devices in 2004 when he purchased a 744T recorder. “I had played around with a variety of other digital recorders, but found the 744T to be the most user friendly and versatile,” says Gambell. “Soon after that, I purchased a 442 field mixer as well. The 744T was my primary machine for a long time until I invested in the 788T. As I moved more into television drama and found myself using more radios, having the ability to isolate different tracks was invaluable.”

Gambell now uses Sound Devices’ 688 as his main recorder with the SL-6 powering and wireless system and CL-12 Alaia linear fader controller accessories, with the 788T as his back up. “The 688 is an all-in-one machine for my work,” says Gambell. “Combining it with the SL-6 and CL-12 makes it incredibly easy to use. Sound Devices has always had field use in mind when creating their products. I’ve been using the SL-6 with single-channel receivers for the boom mics. The ability to assign the booms to whatever track I want with ease has been great, especially when adding a second boom. The feel of the CL-12 Alaia and the smoothness of the Penny & Giles faders are also perfect. In addition, having the 688’s ability to break away and easily go in the bag is great. Having this trio of products has been great for my mini-cart applications.”

For bag work and mini cart work, Gambell has the 688 with the SL-6 and CL-12 Alaia on the cart, with either a PSC Power Star battery/distribution box also on the cart or the SL-6 and NP batteries. Gambell’s main cart consists of the 688 and SL-6 (with Lectrosonic SRbs) and the CL-12 Alaia, along with other key gear — Lectrosonic Venue 2 receiver rack, two Comtek transmitters for village coms, a Sennheiser G3 Transmitter for private coms, a Marshall monitor rack with two monitors, all powered by Remote Audio Meon LiFe and Extra LiFe power distribution racks. He uses Lectrosonic SMVs for his radios (with a mixture of Sanken COS-11 and DPA d:screet™ 4071 lavalier mics) and HMs for his booms. For mics, Gambell has Sennheiser MKH 50s and Scheops CMITs.

“I’ve been using Sound Devices for more than a decade, and Sound Devices remains one of the only true ‘out-of-the-box’ solutions for me,” adds Gambell. “One of the main reasons I started using Sound Devices was how intuitive their products are, and how quickly I could go from powering them on to feeling comfortable using them. That kind of reliability and confidence is invaluable in our line of work. My plan is to continue with the 688 as my cart machine (I’ll probably get another 744T as a backup machine for a mix backup) with the CL-12, then an additional 688 with an SL-6 in the bag ready-to-go with matching radio frequencies for any quick changeovers needed for car rig or difficult access/high mobility work. At some stage too, I’ll be getting a Video Devices PIX video recorder for my mini cart monitor.” 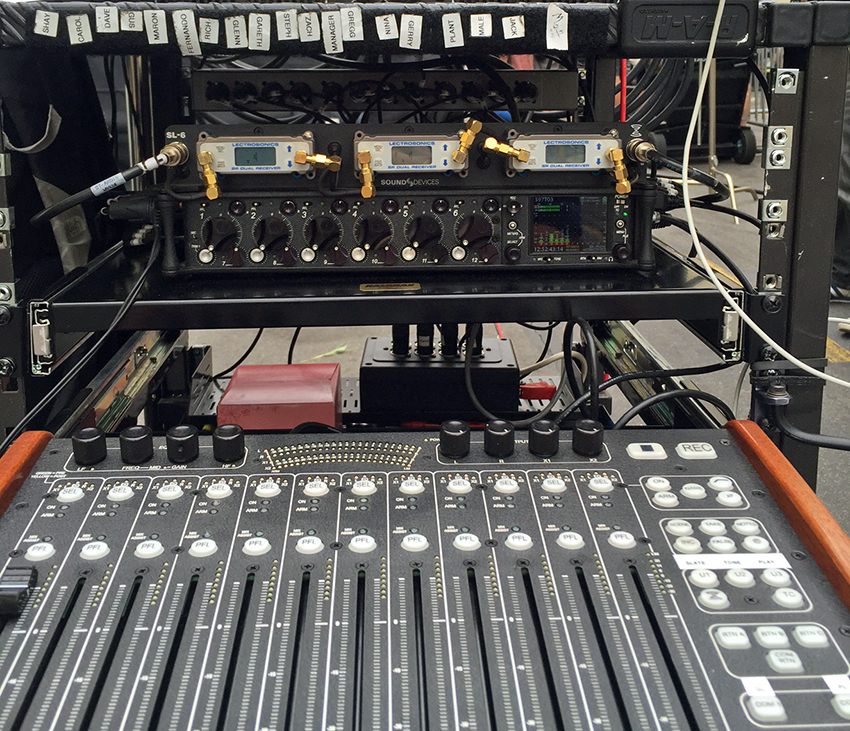