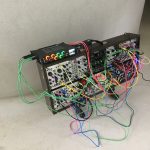 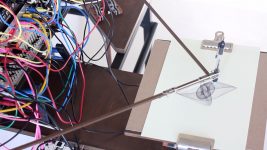 SD.: How did you get into music?

My parents used to play a lot of records when I was a kid.  At school I was asked if I wanted to learn guitar and it all evolved from there.

Thanks! I’ve always been passionate about both, even as a kid I was always modifying and building guitars or tearing apart pedals, amps, tape recorders etc. I’m a complete tinkerer.  As long as I can remember I’ve either been making sounds or building things, or ideally doing both in parallel.

How did you build the Harmonograph?

It was my first lockdown project so there were a few challenges because no suppliers were delivering and I couldn’t go out.  I had to use materials I had lying around.  Off-cuts of wood, scrap copper plumbing pipe, salvaged electronics etc.  I bought a book about harmonographs years ago and had wanted to build one ever since.  All it took was a global pandemic.  Harmonographs are scientific devices that date back to the 1800s that were used to illustrate harmony.  Since buying the book I had also become interested in modular synths.  They’re essentially an open ended sonic network and I thought it would be interesting to combine the two, so that the harmonograph was triggering the synth.  I liked the idea of a machine, invented at a time when we barely understood electricity, talking freely to a musical instrument that makes sounds exclusively using electricity.

What led you to choose the MixPre?

I was looking to change my studio set up to something less conventional and more versatile.  I was already a fan of Sound Devices preamps so when I saw the MixPre Series I knew it was right for what I needed.  The building I live in has some unusual architecture and I like to record in the different spaces it has to offer to experiment with acoustics.  For the most recent tour I was on I attached it straight to the top of my modular synth case using a cold shoe.  The limiters help with the occasional incendiary signals that come from the modular synth.  I have the 10M model so can get all the separate signals from the synth no problem.  I document my building projects on YouTube and it’s ideal for making videos.  I also live in the rural highlands of Scotland so more recently I have been taking it out with me in a sound bag to record birdsong, rutting stag and other wildlife sounds.

You’ve done several builds combining art installations and music. Do you start with the visuals or sound in mind first or does it change for each project?

Quite often it’s the visuals – or at least the vague visual concept. I’m never exactly sure how the work will sound, or if the sounds will be any good, until the the piece is finished.

What draws you to one-off performances and how do you approach them verses the more straightforward and composed songs from your works?

Not too long ago I played a show with a 35-piece orchestra and full band. That sort of thing is nerve-wracking because you’re very aware of your role and how any mistake you make can impact all the performers. Improvising with synths and temperamental hand made instruments can have its moments too, but I take comfort in the unpredictable nature of it.  Whatever happens, happens.  Even if it’s a total disaster at least you stuck your neck out.

Any future projects you’re ready to talk about?

I’m currently putting the finishing touches on a custom tape looping machine I designed and built for a musician. I’m also releasing a new album in November called The Mountain And The Pendulum.

You can learn more about Campbells’ work here.