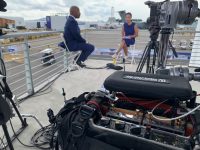 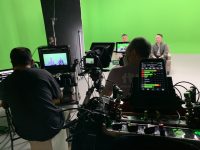 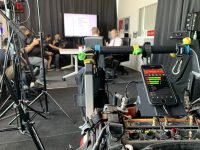 Can you walk us through your current setup for events/livestreaming?

I’m using an 833, an SL-2 with two MCR54s, the +4 plugin, and four instances of NoiseAssist. I run Wisycom passive antennas for reception. My main priority would be to make sure talent mics are mixed to broadcast levels and fed directly to the main camera that will carry embedded audio via SDI to the vMix PC.

The talent needs to receive instructions from the master control room (MCR), usually via unity comms as well as the vMix program. The HK presenter talks with the two local presenters via the program mix. For this I would take two separate feeds into the 833 and would bus them individually for each talent IFB.

The flexible bus routing allows me to mix the MCR feed and program mix individually for talent. There are instances when the talent wishes not to hear MCR while watching program. I can quickly toggle in the bus mix and fade down the relevant bus sends immediately. I would also listen in on MCR by routing their feed into one of my headphone presets.

My main monitoring is from the primary camera return. The 833 does not have dedicated return meters like the 888 and Scorpio. This is circumvented by routing the return signals to channels 7/8 for visual level monitoring. The NoiseAssist instances would be active on the L/R mix and the Individual IFB buses for the talent.

A third bus would also be set up for lackey IFBs passed around the studio floor to the teleprompter controller, on-site producer, and other personnel who need to be aware of what is happening while we are on air. Talent uses the MPR50-IFBs with mono earpieces while the lackey IFBs are Sony UWP-D receivers with the headphone jack.

What is different or unique about your workflow for live events versus typical location sound work? What are some challenges you run into? What is fun about working events?

There is no room for error in live event streaming and rehearsals are taken as seriously as actual shoot days. When compared to typical location sound work there is not as much mic-ing. We stick to an exposed clip mic. I use the DPA 6061 with the mesh grid.

There is no need to break a sweat as we are usually in an air-conditioned room. No need to carry the bag or break out the boom. Challenges that arise are usually inherent to the location. There could be a server room next door or central air-conditioning that might be slightly annoying; 3-4 dB of NoiseAssist fixes it.

There might not be enough setup space for certain events, so I operate off my cart. The fun thing about events is that you work with very talented, skilled individuals who look out for one another to make sure that we can all deliver a great live stream or ENG broadcast without running into any major technical difficulties.

The other fun thing about these kinds of shoots is that I get to push my technical know-how with the 8-Series to greater limits and provide unique solutions required according to the tech specs issued.

When building your kit, why did you choose the 833? Do you own other Sound Devices equipment?

When I started out doing location sound in 2015, I chose to start with a 633. After a couple of years in, I got myself a 688, SL-6, and CL-12. To complement my kit, I also had the first gen MixPre-6. I was completely satisfied with my gear until COVID19 struck and I started seeing a shift in clients wanting to live stream events. It became common for shoots to be directed remotely via room. There were limitations to what the 6-Series could do.

I waited for a couple of months before I made the decision to jump to the 8-Series. I sold off all my 6-Series gear before purchasing the 833. I would have gotten the 888, but it was not released until much later. The Scorpio would be too much for me to handle financially when track counts were dwindling (i.e., less than six talent wires). For wireless, I like the SL-2 and its integration with the Wisycom MCR54 – everything just works with the latest firmware for both products.

What features are you using the most for event work?

Bus sends, bus mix, and flexible routing are my most used features. NoiseAssist is also used on the mix to the camera. I like the ability to customize my toggle presets. I use lots of shortcuts to activate the relevant features/settings that I require. I appreciate the redundancy in media recording.

I have a 256GB Sandisk card that mirrors my primary SSD, and I would usually put a daily card into slot two, to send to clients. The iCon M+ doesn’t belong to me, so I guess that is one thing I need to get as it is really fast in mixing down the bus sends as opposed to operating the mixer without a control surface. The EQ is also a godsend when I need to compensate for nasal voices or ‘swallowed’ mics.

Can you share a tip that you wish you had known at the beginning of your career?

One tip I wish I had known is that as much as there is a science to location sound recording, it is also an art. Simplicity is key to getting work done. When I started out, I was always fussing about the science – getting the levels right, mixing hot, the thresholds to set parameters for limiters and compressors, and whether there was an EQ preset that works for every voice.

Along the way, I learned that I could only become a better location sound recordist when I took the time to experiment with the gear and make mistakes. The 8-Series allows me to experiment by letting me route a single input to multiple outputs, which I can then try different settings for EQ/HPF/LIM/COM.