San Francisco, CA — When Caruso Company, a San-Francisco-based video production agency, landed a project requiring the use of a hidden video camera on the streets of California, production sound mixer Philip Perkins was brought on to manage the audio elements of the shoot. Recognizing the need for audio equipment that could withstand extreme heat and long hours under the California sun, Perkins instinctively turned to the 744T digital recorder from Sound Devices, specialists in audio and video products for television, film, and live production. For nearly a decade, Perkins has relied on this recorder, making it a staple in his rig. 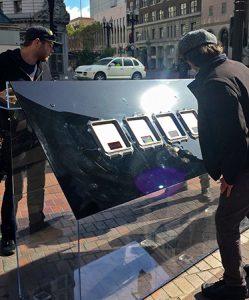 “The 744T has been vital to my on-location, multi-track work for many years,” says Perkins. “My 744Ts are on every job I do in one capacity or another. They have been so reliable and rugged that I really didn’t think of using anything else for this project.”

The project, for videogame developer UCool, required that Caruso Company use hidden cameras to film “passersby” on the streets of California. The content would be used for commercials about UCool’s new mobile/online game. UCool planned to capture people’s reactions as they interacted with a large Plexiglas® exhibit featuring iPhone 6s displaying the video game characters. Touching the phones’ screens triggered a loud pre-programmed sound effect. UCool’s creative team, which watched everything unfold on separate monitors, would cue the sound from a nearby speaker. Reactions were captured with audio and video equipment placed inside a plywood box inside the exhibit’s clear acrylic glass shell. The setup posed some unique challenges because the interior of the exhibit would often reach temperatures upwards of 200 degrees ºF.

For the project, Perkins used two Sound Devices 744Ts – one placed inside the box and the other kept with him in a nearby location. Perkins also utilized two Sonotrim mics rigged in bespoke mounts on the interior of the exhibit, flanking either side of the GoPro® camera being used for video capture. The outputs on the interior 744T fed a pair of Lectrosonics® wireless transmitters, which sent the mic audio to Perkins. He then recorded those channels on the second 744T and created a mono mix for the director and client, stationed in an RV parked away from the UCool setup. 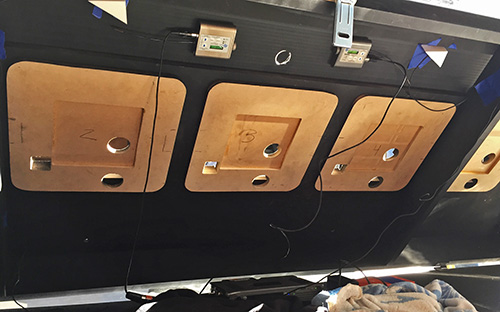 “The GoPro [camera] would frequently die once it got too hot,” Perkins explains. “Two-hundred degrees Fahrenheit seemed to be its approximate cut-off temp. When we’d open up the box to cool off the GoPro, the 744T was always still rolling, even though it was way too hot to touch.”

Perkins and the team at Caruso were thrilled with the performance and overall results of the 744T. He believes the outcome is a testament to the recorder’s reliability, and longevity, since the device he used is over 10 years old and still has its original PATA drive. “It was flawless,” he says. “There was not a burp or a hiccup. We had great, consistent audio for the duration of the shoot.”