Sound Devices 7-Series recorders go on a wild ride with cast and crew of Mad Max: Fury Road and proves vital in high-speed production across the hot, sandy landscape of Namibia.

Namibia, Africa As the title implies, Mad Max: Fury Road is a mad and furious, high-action post-apocalyptic film set in a desert wasteland. The plot calls for a warlord’s harem to race across the sandy landscape in a desperate, high-speed bid for freedom from his ruthless henchman. Both escapees and their pursuers form an “armada” of armored vehicles. Hidden within that sandstorm were members of the audio crew, trying to capture every bit of dialogue and sound effects, all while in motion. Faced with such a monumental challenge, veteran production sound mixer, Ben Osmo, and vehicle FX recordist, Oliver Machin, turned to Sound Devices’ 7-Series of digital audio recorders. 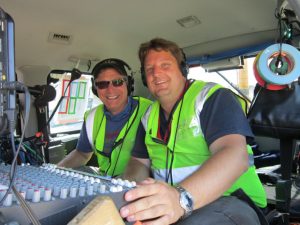 “I used four 788T-SSDs plus four CL-8s, and did mix down to each recorder, plus a two-track mix down to a 744T for dailies,” said Osmo. “I also had a 788T rigged in my sound cart and kept that in a larger truck for a couple of months, next to video split.” In addition to that equipment, Oliver Machin brought a sixth 788T in a bag to record extra vehicle FX when necessary.

Osmo said, “The use of multiple 788Ts became necessary when the challenge was to record multiple tracks under extreme conditions. The 788Ts were very versatile. As well as ISO tracks and mix downs, we were able to set up mix minuses with AUX sends into a monitor mixer. We had available 42 channels of radio mics. This was because of the repeater systems and different RF blocks in play, so we could pre-rig vehicles ahead of time, and in my van, I would then cross over to the correct receiver blocks once they were in action.”

Machin said, “It was kind of ridiculous trying to keep track of that many transmitters. We were planting mics on the vehicles… and Mark Wasiutak would also travel with a boom mic to grab the slates and sync effects at the time with the shots.”

Microphones were hidden in the cabin and on the principle cast, in the engine bays, near exhausts, on top of the “War Rig” (the main characters’ get-away vehicle), and on a vast number of supporting cast members in other vehicles. Capturing all of that audio would be a major task on a normal sound stage, but portability requirements for Fury Road would not allow for a typical film-studio audio setup, so the crew had to get creative.

“We had a 4×4 vehicle,” said Machin, describing Ben Osmo’s van they dubbed the Osmotron. “Instead of having sound carts traditionally… that wasn’t going to cut it on a road movie traveling at 80 or 90 miles an hour across the desert. Nobody was going to keep up, so we built into his vehicle huge racks of radio mic receivers.”

“It was lucky that I had all SSD 788Ts,” Osmo said. “So, even though most of the filming was off road, they performed exceptionally well under extreme vibration.” Separately, a 744T was suspended in a pouch so it could absorb the shocks of the Namibian desert during the 6-mouth-long production schedule. “They never skipped a beat, especially when travelling and recording on very bumpy and dusty terrain.” 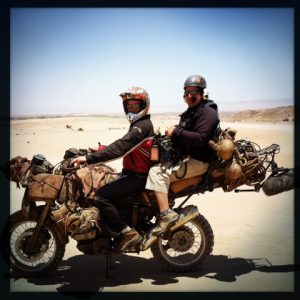 Adding to the complexity, the cast members were essentially in a rusty box, so RF reception had to be rethought, making repeaters sometimes necessary. The crew set up three multiplex systems (which Ben designed with assistance of RF experts) with RF combiners and high-powered transmitter boosters to maximize the range of 1-to-3 kilometers, not only for recording purposes but also to aid communication behind the scenes.

“As we travelled long distances, the walkie talkie repeater towers were often out of range,” Osmo said, “so I was asked to provide my comms in the Lectrosonics radio mics and IFB systems to Director George Miller and First AD and co-producer, PJ Voeten, as they also often were great distances apart—at least 500 meters to 1.5 kilometers—and they were able to have hands free communication. Cinematographer John Seale and two of his operators were on this system, and the First AC Camera people, as well.”

Comms were also used to feed audio to IFB receivers for cast members, including Immortan Joe played by Hugh Keays-Burne. As sound mixer, Osmo also had to feed a musical mix to musicians armed with ear wigs to aid them in keeping time to the beat while riding atop the “Doof Wagon” vehicle, and playing instruments, such as drums and a flaming guitar.

When the action call came, only the camera tracking vehicles, SFX, and the lonely sound van were in pursuit. Mark Wasiutak, key boom operator, travelled on the hero vehicles when cameras were on board. He was able to troubleshoot with assistance from the rest of the sound crew whenever the armada was stopped for checks.

“It was like a whole armada,” Machin said. Once it stopped, “Every department was jumping in their 4x4s and travelling to assist. I mean literally they would be going five, six, seven kilometers across the desert, turn around and come back again, or go farther.” The whole unit relocated to new technical base camps, then waited for the cue to go again. “It was quite a feat to make that happen.”

In the Osmotron , Ben Osmo used:

Oliver Machin’s bag system for recording vehicles in the last weeks of the Namibia Shoot included his 788T and a CL-8.

On Ben’s sound cart for FR in studios and locations in Australia:

The 788T-SSD is equipped with eight full-featured microphone inputs and twelve tracks of recording. In a compact, light-weight, stainless steel and aluminum chassis, the 788T-SSD accommodates individual controls and connectors for each of its eight inputs, as well as numerous additional I/O and data connections.

Mounted to the 788T-SDD, the optional CL-8 accessory is a powerful mixing control surface, providing rotary faders for each of the recorder’s eight inputs, plus input routing and setting control.

The 788T-SSD comes with a factory-supplied, high performance solid-state drive, which provides several important benefits including vast internal storage capacity, continuous recordings of over 60 hours of 24-bit, 8-track audio at 48 kHz, plus better immunity to shock, temperature extremes, and zero acoustical output. In addition to its superior shock immunity, the SSD used in the 788T-SSD also enhances data transfer due to its increased transfer speed versus a spinning hard drive.

Another benefit of the 788T is its reliable timecode jamming capabilities, making it right at home in complex multi-camera sync-sound productions like Mad Max: Fury Road. Although the 788T has an on-board, high-accuracy Ambient timecode generator, while on location for Fury Road, the crew used Ambient master clocks with GPS antennas set to Greenwich Mean Time. All cameras were supplied with Lockit boxes and Deneke slates with Ambient Lockits.

Osmo said, “My 788T recorders and the 744T were jammed from the same Ambient master clock. All the recorders synched up beautifully and never missed a beat.”

Mad Max: Fury Road, which debuted May 2015 in theaters around the globe, is the fourth film in George Miller’s Mad Max franchise and the first film in that franchise in three decades. It stars Tom Hardy as Mad Max, replacing Mel Gibson in the original title role, along with Charlize Theron, Nicholas Hoult, and Hugh Keays-Byrne.