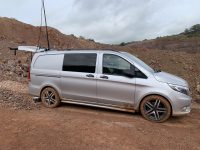 Deian Humpreys started his career in location and production sound 27 years ago.

“I had always been interested in television production. My father worked for many years in the industry, and when I was taken to studios as a child I was fascinated by sound and admired the huge analogue mixing consoles used at that time.”

“I was a music student and aspired to be a professional clarinetist, playing in an orchestra. The competition was fierce though, and when I was offered a six month contract as a trainee boom operator on a Welsh television hospital drama, I jumped at the chance! The recordist on my first job was Alan Jones. Not only was he good at his job, he was a great teacher and I was an eager learner. I was then fortunate enough to get a job working for a facilities company who trained me in all aspects of sound – working on a live studio floor, outside broadcast, and documentary sound. I then spent a few years working as a sound supervisor in a live television environment – this honed my mixing skills. After spending a few years as a freelance documentary recordist that I finally found myself back in the television and film drama world. I relished the opportunity to become a drama mixer and quickly set about putting kit together. At the heart was the newly released Sound Devices 788T recorder. I was bowled over at how easy it was to use and how wonderful it sounded. It lasted me as my main recorder for around nine trouble-free years. I had two 788s running simultaneously to increase track count and now still carry one as a backup recorder.”

After years of heavy use, Humphreys upgraded from his reliable 788’s to the newly-introduced Scorpio.

“When news came of the Scorpio, I knew my prayers had been answered! I was taken by Martyn and Elis from Soundkit Limited to the UK unveiling, and was lucky enough to be the first to bring a Scorpio back to Wales.”

One of the main factors for me in purchasing the Scorpio was it’s track count. I needed something that would not only accommodate the growing number of tracks that I record on a day to day basis, but also stand the test of time – I doubt I will ever need 32 but it’s reassuring to know that I will never run out of inputs.”

“Making the transition to the Scorpio was easier than I had imagined. I installed it on the trolley during a quiet morning working on the new series of Doctor Who back in May. I had already purchased an iCON Platform M+ and D2, some extra cables and a Samsung tablet so I was ready to go. By lunchtime the installation was complete and the afternoon’s work was recorded on the Scorpio!”

“The first thing that struck me was how it sounded – I was blown away. Having had a demo of it’s menu and was aware of its capabilities, I hadn’t until now actually listened to the Scorpio. The same microphones, the same headphones, the same ears, the difference was the Scorpio. I was bowled over by what I was hearing and felt completely justified in spending my hard-earned cash!”

“Although it is very different to the 788, I found the menu of the Scorpio incredibly easy to navigate and although the machine is very powerful, it was easy to set up. The difficulty of having such a high track count could prove problematic though if you’re working from a trolley that needs to fit through regular doorways. For 32 faders you’d surely need a desk that’s at least four feet wide. This is where I find the Platform M+ so useful – pairing it with the Scorpio is ingenious. The small footprint and touch-sensitive faders with four layers is a delight to use. If I need to access a channel on a different layer I use the channel grouping and MixAssist facility – this is one of my favourite features and it works fantastically. The M+ is very easy to use and setup – not too many buttons and functions it is the ideal partner.”

Scorpio’s powerful hardware condensed Humphreys’ set up to a single mixer-recorder, while expanding the routing capabilities needed for a complex production.

“Using two 788s in the past, I would feed all my radio mics to one machine and take a MixAssist output to the second machine which also had my booms. In a similar mode of operation, I group my radio mics within the Scorpio and control them with one fader on the M+. In this way I can also control them individually if I want. The feeds to production and boom operators are controlled and routed internally, with comms and notification bells added. I might not use all 10 buses on a daily basis but it’s so reassuring to know that it’s under the hood if I need it. The Dante routing is again so easy to use. I can send feeds to the IEM transmitter in the stage box or to any of other six outputs available on a Yamaha Dante Tio 1608 simply by clicking in the box on the Scorpio menu. As a drama recordist, who as a matter of course puts a radio mic on every speaking artist, I have at my disposal ten personal radio mic channels. I use two Schoeps Super CMIT mics and find it useful to record both treated and untreated signals from each mic. My track count is already up to 14, and with plant mics, playback and the occasional use of a Cedar DNS 2, I know I still have room for more! I use the Dante Controller and Dante Virtual Soundcard and can input and output more sources if needs be.”

While Dante may be new to production sound workflows, the benefits have already manifested.

“I have always coveted the idea of having my trolley in one place near video village, and a stage box close to set. Not having to move the trolley after every setup was a dream to be realised. That dream came true when I bought the Scorpio. I put all my radio mic receivers in one 19 inch rack-mounted box along with a stereo IEM transmitter and a Yamaha Dante Tio 1608. I can run up to a hundred metres of Cat 5 cable, and have even used the internal Cat 5 system in the BBC’s studios in Cardiff to go from stage to stage without needing to move my trolley. This system for me is so incredibly useful and convenient and has been a complete game changer.”

“Recently we were shooting in the stone cellar of an eighteenth century country house accessible only by a narrow stairway. With no way of getting my trolley down there, I was worried how we would cover six speaking actors and five pages of dialogue. The Dante stage box was put together and saved the day we ran one single Cat 5 from the box in the cellar back to my trolley and we were happy.”

“It’s not for every situation, but when I watch the camera department moving monitors and kit constantly from one place to the other and then back again, there is a sense of satisfaction when we only need to move one box every now and again, especially when it’s raining and I’m in the comfort of my van!”

Deian reflects on six seasons on Doctor Who and the challenges of the project.

“I started working on Doctor Who in 2012 and have recorded six consecutive series. My brief when I started was to lessen the amount of ADR or looping that was done post-production – not an easy task when this science-fiction show demands smoke machines, wind machines, snow machines and so on.”

“Each episode of Doctor Who is like a mini feature film and is very challenging. One minute you could be in 16th century Scottish castle, or 18th century London on the Thames, the next you’re in a huge, dirty, dusty, noisy working power station that’s doubling as a huge spaceship. No two days are the same and there’s not much time to change gear or clean the equipment during a nine-month run. It’s relentless but exciting. When you start shooting a new series you’re never sure where it‘s going to take you!  With the aid of Sound Devices recorders I have recorded over 70 episodes to date.”

“My method of working stays the same from job to job. I always have two accomplished boom operators. Currently I’m working with Chris Goding who has been with me for eight years, and Joe Malone. They are lovely people. They have to be because I won’t spend 11 hours a day for 9 months with somebody I don’t like even if they are amazing at their job. All my dialogue will be captured on booms if possible – if it’s not possible then I will record a wildtrack. I cover as many off-lines as possible. I will radio mic all speaking artists and iso these tracks. My title is a ‘production sound mixer’ and so I will mix. I will follow the dialogue and mix hard, not leaving any unused mics open. I will even use a radio mic to fill in any gaps if a boom can’t reach. It’s vital for me that the edit has as clean a mix as possible to cut to. Assemblies are distributed to producers, executive producers – important people, so I don’t want it sounding like a dogs dinner. Radio mics are a great safety net and I am constantly monitoring them even when booms are in place. The boom ops are constantly tweaking if necessary. I insist on having a conversation with post-production sound beforehand if possible so that we are all working towards the same goal. It’s important to strike-up a relationship with them from the outset that will benefit the end result.”

“When I started 27 years ago with Alan Jones, he had just purchased a state-of-the-art Stelladat machine – it was his pride and joy. On the bottom shelf he still had his trusty Nagra. Those days we hardly every used radio mics and so the booms captured everything. Two tracks were all you needed and so you had no choice but to mix. There is less use of perspective these days, which is a shame, but with more cars on the roads and generally more noise engulfing our modern lives, it’s not surprising. However, I think the greatest advancement has been in noise reducing technology both for live mixing and in post-production sound. It’s amazing what can be done.”

To learn more about Deian Humphreys and his work, visit his website.