Professional sound recordist, Deian Humphreys, entrusted 788T-SSD and other Sound Devices gear to provide out-of-this-world audio recording capabilities for BBC’s Doctor Who. CARDIFF, WALES — When BAFTA Cymru Award-nominated sound recordist Deian Humphreys set out to capture all of the dynamic dialog for the BBC hit science fiction television program Doctor Who, he turned to Sound Devices 788T-SSD digital audio recorder, 442 field mixer, CL-9 linear fader controller and CL-8 mixing control surface to record and mix all the audio action. With 20+ years of experience in professional audio, he has worked in many aspects of sound production, ranging from location sound recording for drama and documentaries to sound supervising for studio and outside broadcast programs. Doctor Who is a British science fiction television program produced by the BBC depicting the adventures of a Time Lord—a time traveling, humanoid alien known as the Doctor. He explores the universe in his TARDIS (Time and Relative Dimension in Space), a sentient time-traveling spaceship. Its exterior appears as a blue British police box, a common sight in Britain in 1963, when Doctor Who first aired. Along with a succession of companions, the Doctor faces a variety of foes while working to save civilizations and help ordinary people. As the production sound mixer, Humphreys is charged with recording clean, clear dialog and reducing the amount of ADR needed. This can be quite challenging on a science fiction show that has a large amount of special effects audio in the background, including smoke, steam and snow machines, as well as a multitude of explosions. Humphreys records the majority of the show using a trolley-based rig, which consists of a Sound Devices 788T-SSD with a CL-9 controller. When on the go, he takes his 788T-SSD using the more portable CL-8 mixing control surface. “One of the features that I really like about the 788T is that it allows me to easily switch between a Schoeps SuperCMIT digital mic and a Schoeps analog mic without the need for any peripheral equipment,” says Humphreys. “I will often have eight iso-tracks being recorded and two mixed tracks, so the 788T is being driven hard. It always performs incredibly well.” 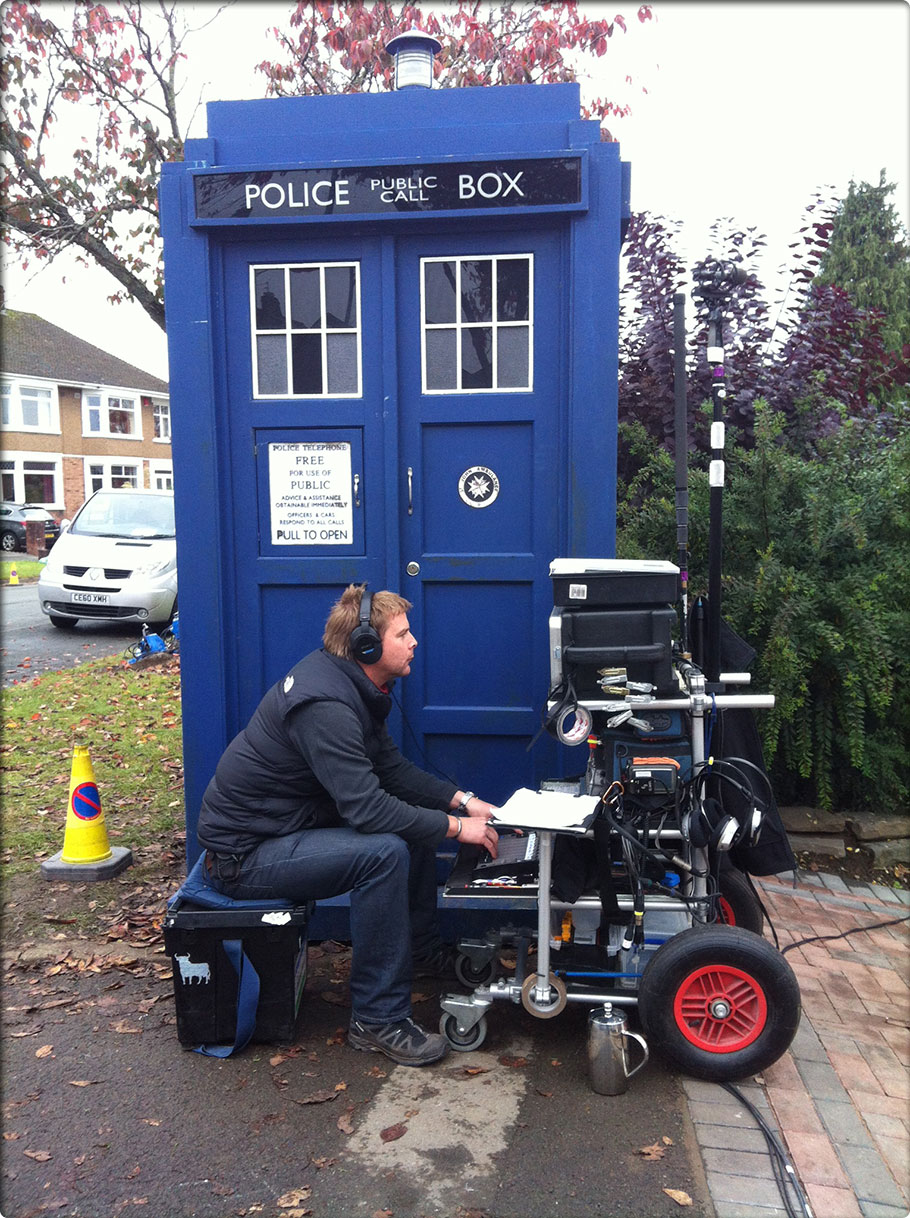 Humphrey’s also praises the 788T for its flexibility and versatility, which is paramount for recording on a show that utilizes special effect voice modulations on a daily basis. The Daleks, the Doctors’ arch-nemeses, are voiced by Nicholas Briggs, who uses his own proprietary secret modulation equipment. “Nicholas will sit by me on set watching my monitors and I will take an output of his magic box and feed that into my 788T,” he says. “I am able to iso that and give him a clean feed of what is happening on the floor. I use the Sound Devices 442 as his monitor, so I’ll feed a clean output into the 442 and give him his Daleks voice on another channel, so he has independent adjustment of his tracks, which he will often mix himself. I can then take another output of his voice and feed it to a loudspeaker on the floor for the actors, and another for the animatronics controllers, who make the lights on the Daleks flash, which serves as a speech recognition tool when they talk. It’s actually quite amazing and all made possible by the 788T-SSD with the 442.” Humphreys also appreciates the 788T-SSD’s metadata features, which allow him to remain in close communication with the editors at the BBC. According to Humphreys, “When I initially started a year and half ago, I had a long conversation with the dialog editors and one of the requests they had was to match the name of each character with each track. Not just lav 1, lav 2, lav 3, but the character name, so I’m constantly in the 778T-SSD’s track naming menu and I’m re-labeling tracks when different characters come in on those particular mics. That’s such an important feature for me and for the editors, who need to know exactly who is on each track, so they don’t need to waste time pre-listening to tracks to find out who’s on what.” “I have never looked back after purchasing my Sound Devices equipment because it just performs miraculously,” continues Humphreys. “I’ve used my Sound Devices gear 11 hours a day, 11 days and nights in a row, for 10 months straight and it’s exceptional. The service and customer relations are second to none and the company’s regular software updates are just incredible.” With the influx of multi-tracking both in the field and on-set, Sound Devices 788T-SSD has become the next generation digital audio recorder for advanced sound mixers that require additional isolated tracks. The 788T-SSD comes with a factory-supplied, high performance solid-state drive. The SSD provides several important benefits, including vast internal storage capacity, continuous recordings of over 60 hours of 24-bit, 8-track audio at 48 kHz, increased transfer speed versus a spinning hard drive, increased immunity to shock and temperature extremes and zero acoustical output. In addition to its superior shock immunity, the SSD drive used in the 788T-SSD enhances data transfer due to its increased transfer speed. The high-performance SSD medium in the 788T-SSD has faster read- and write-speeds than the mechanical hard drive in the standard 788T. Like the standard 788T, the 788T-SSD is equipped with eight full-featured microphone inputs and twelve tracks of recording. In a stainless steel and aluminum chassis weighing less than four pounds and roughly the size of a hard-covered novel, the 788T accommodates individual controls and connectors for each of its eight inputs, plus numerous additional I/O and data connections.
This Website uses cookies as explained in our Privacy Policy. If you reject the use of cookies on our Website, some pages may be inaccessible and some features may not function properly.