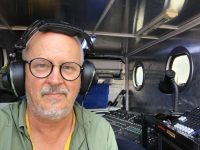 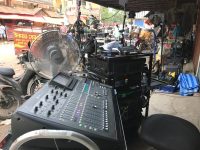 When Guntis Sics, a production sound mixer based in Sydney, Australia, first read the script for Dhaka, a kidnap drama starring Chris Hemsworth, he knew it was time to invest in a new wireless system. The production, based in India and Thailand, required a digital system capable of both transmitting and recording simultaneously.

“The thing that struck me immediately about the production sound job was the distances that each shot was going to cover,” began Sics. “Vehicles chasing each other through narrow streets and alleys, long scenes that covered vast areas and complex stunts. A single shot sometimes covered over 4 miles. The reality was that five seconds after action was called the hero vehicles were already out of sight and out of range.”

“I’d been told about a couple of wireless systems where the transmitter could also record, and I started to look into the idea. The hybrid solution, and the perfect one as it turned out, presented itself from Audio Limited, the A10 Wireless System.”

When Sics received the A10 Digital Wireless System, he was able to operate it without cracking open a manual.

“Gratifyingly, or perhaps alarmingly, the A10 made sense to me immediately and it was up and running within minutes. This characteristic is one I rank very highly when I choose equipment.”

“My boom operator Tom Harrison did the setting up and placement, hit record and stop, changed the batteries, jammed the code and generally looked after everything A10. Operationally speaking they worked wonderfully, no complaints there. He never felt inclined to throw them across the room, unlike some of my other, less reliable gear. Of course with this calibre of equipment you are entitled to expect reliability, but even so it was pleasing to work in sweltering, filthy conditions and not have any technical issues at all. 40 + Celsius and incredibly dusty. Pleasing for the gear, not so much for the crew.”

“At the calmer end of this film we used the A10s with Schoeps microphones on a boom, and they sounded absolutely fantastic. I haven’t used a cable for a boom mic in years, but the A10 reminded me how great that sound is. Tears may have welled in my eyes.”

Principle production for Dhaka wrapped in May. The film is expected to release on Netflix.