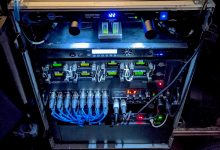 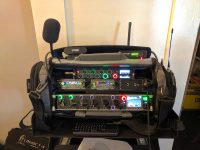 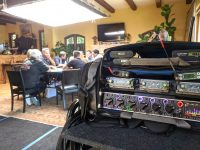 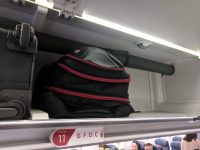 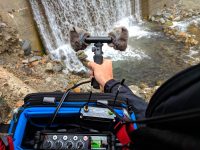 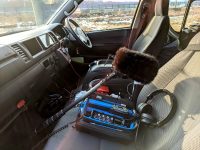 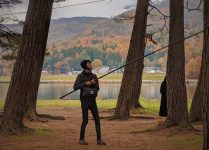 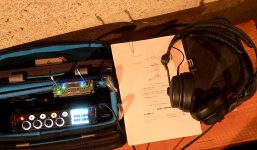 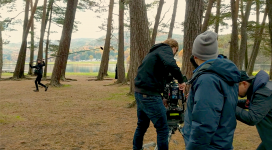 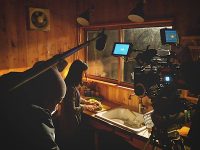 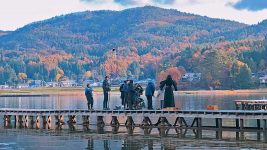 SD: What is your current setup?

Currently, I have multiple setups containing Sound Devices 8-Series and MixPre recorders, Wisycom and Lectrosonics wireless systems, DPA boom and lavalier microphones, K-Tek boom poles, Denecke timecode, Comtek and Lectrosonics IFB systems, Sennheiser headphones, and more. I can fully load or scale down my cart or bag, depending on the project, to provide a powerful yet efficient setup.

What types of shoots dictate when you use the 8-Series vs the MixPre?

Deciding whether to use an 8-Series or MixPre recorder comes down to my routing and workflow needs. While I trust both to have dependable performance and sound great, each has its own approach and advantages to deliver high quality recordings for every show.

My main cart features a Scorpio recorder, used on productions that require the most track counts, lots of I/O options including Dante, serious routing flexibility, and multiple busses & mixes. When I need to be mobile with a harnessed bag or bag cart, while still requiring many of the features offered by Scorpio, I use an 833.

Some projects, like sit-down interviews or other low track count situations, have simpler workflows that could be accomplished by a MixPre recorder. Its size and weight are also big considerations for traveling projects that demand the most agility, like ENG or documentaries. They’re also great backup recorders, either for redundancy on a cart, or to just keep handy in my follow case.

I’ve used both 8-Series and MixPre recorders in a wide variety of projects and environments, across the USA and overseas. No matter what production challenges lie ahead, I know I can count on my Sound Devices.

You speak Japanese and often work on projects in Japan. Tell us about one of your favorites.

Over the years, I’ve worked on a collection of bilingual and international co-productions in Japan. One of my favorites so far was supervising the sound on my friend’s independent horror film, Makhaliss. All of our scenes were shot on location, deep in the Nagano countryside, from old cabins to mysterious woods. As a barebones crew, we often filmed in locations with rough terrain and limited accommodations, so I needed to travel light as a one-man band, and work with a kit that was versatile and had a low footprint.

With a small cast and simple workflow, the MixPre-6 recorder was perfect for this project. I needed my rock solid DPA boom, two to three channels of wideband Wisycom wireless, timecode sync, and a proper multitrack recording. Stable power sources were scarce, but by using external DC powering I kept my bag running all day with a single 98 Wh smart battery. My entire sound kit was built to fit within my carry-on luggage for extra peace of mind

The director also requested ambiance recordings of every location we filmed in, so I also brought an ORTF stereo mic and captured the unique wildlife and eerie landscape of central Japan. The whispering trees, curious birds and howling monkeys became key elements in the film’s final mix. I created Preset profiles for dialogue scenes and wild sound, and could quickly switch between the two modes on the MixPre.

I ended up editing the dialogue and SFX, and creating the final mix, which mostly contained natural sound captured on location with the MixPre. Makhaliss continues to make rounds in the film festival circuit. It was nominated for several awards including “Best Sound Design,” and was released on Japanese streaming platforms.

How is location sound work different in the US vs Japan?

In general, location sound work is similar in both countries, especially after how broadly the craft has been shared over social media, and the increasing availability of imported North American and European brands. There are some key cultural and technical differences, however.

Production companies, especially below the line crew, are not exempt from Japan’s corporate work culture, with its hierarchical and traditional challenges. For example, the concept of overtime is nonexistent in Japan, so you work until your boss, in this case, the director, decides the day is over. In a location crew, the sound mixer is often perceived as an accessory to the camera operator, although this is gradually improving too.

Owning and operating your own equipment is also relatively new. Even with more affordable gear options these days, rental rates are much lower in Japan, if they can be negotiated at all. So the kits are usually provided by the corporation or contracted rental houses, who tend to prefer Japanese or other Asian brands over the additional cost of buying and supporting Western products.

On the technical side, the most striking difference is Japan’s strict RF allocation and operation rules. Wireless microphones cannot exceed 10 mW transmission power, which is typically good enough in a close quarters ENG shoot, but can become troublesome with multiple channels, especially in very densely populated areas like Tokyo. Thankfully, my Wisycom wireless could operate in Japan’s legal UHF band, transmit at 10 mW, and ignore background noise with tunable squelch.

What trends do you see coming in location sound?

The hottest trends in location sound now are portability, RF flexibility, remote control, and value. We’re seeing the rise of consolidating four to eight wireless channels or other I/O into smaller packages, with centralized control from the recorder. When we lost almost all of 600 MHz due to the 5G rollout in North America, the battle over coordinating more channels into smaller bandwidths is fiercer than ever.

Conversations about remote control, whether via networked audio over IP, and wirelessly over cellular or Bluetooth radios, have sharply increased during the COVID-19 pandemic. Over the past year, many production sound teams have implemented remote wireless stations that could carry dozens of channels through a single ethernet cable back to the main mixing cart, for social distancing measures. Remote wireless transmitter control, once a luxury, has now become crucial to limit physical contact. Practices like these are likely to continue even after life “returns to normal”.

Barriers to entry are also becoming simpler and cheaper for owner/operators as competition intensifies, and there is a lot more choice for first-time buyers. But brand recognition above a certain production tier still holds true, and the tools you show up with on set can matter just as much as your ability to do your job. I’m always curious about where my career will take me next, and I’m thankful to have tools I trust to maintain a high standard of work.

Matt Brodnick is a Japanese-American production sound mixer specializing in television, documentaries, and ad campaigns filming in California and in East Asia. You can learn more about his work here.