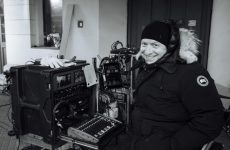 Prague, Czech Republic – Emmy and Oscar-nominated sound mixer, Petr Forejt, CAS, has a global perspective when it comes to the ever-changing demands and technological developments within the sound production industry. “There will never be the moment where you can say you know everything. As the technology is constantly changing, the workflows are adapting, and it is a never-ending education you are facing.”

He began his studies, with a focus on sound, at a film school in Prague. After working as a boom operator in the 80s, he spent the 90s gaining even more practical experience behind the scenes for many US films as well as German, French, and UK productions.

“That was the best schooling of my life—always (working with) different sound mixers, (observing) different opinions and work styles. One day, I thought I would also try sound mixing, and that’s what I did.”

Forejt might make the transition from boom operator to sound mixer seem easy, but it has not been without plenty of challenges along the way. Take, for instance, one of his most recent projects, Genius, for which he earned an Emmy nomination in 2017.

“That wasn’t an easy shoot at all. Especially the first few episodes with Ron Howard, who directed it in a high action-like way,” Forejt says. “That was very demanding. Each scene consisted of many different shots, complicated perspectives and situations—long days with multi-camera setups, and you could even say multi-unit setups. We had several situations where we were still finishing one scene and already preparing another one, sometimes even shooting the scenes in parallel… That was pretty fast-paced.”

Likewise, the movie, Wanted—a science fiction thriller, for which Forejt (and two others: Chris Jenkins and Frank A. Montano) received an Academy Award nomination for Best Achievement in Sound Mixing—was no easy walk in the park.

“It was a pretty complicated and challenging job for me as a sound mixer,” he admits. “The soundtrack for this movie was of course created in cooperation with sound mixers in the recording studios in the US, so there were many people involved on this project…The producers were very happy with the results we were delivering to them. There was very little post synchronization, which made many things a lot easier and less time consuming—that is for us sound mixers an indicator of the quality of work we are delivering.”

He adds, “Of course it is nice if someone sees the hard work and ideas you are putting into such projects, and also appreciates it. However, I try to deliver the same quality of work on any project I work on, no matter if it’s a Hollywood big budget production or a smaller budget film.

“I like, for example, the film The Illusionist.” Forejt elaborates on how that production was a tricky one as well, but for entirely different reasons. “You had Edward Norton who was playing a magician. We were shooting the magic shows, and the audience was all Czech extras…. I wanted to record the atmosphere of the reactions of the audience. So, we spent a lot of time training with the audience. There needed to be reactions in English from a crowd that shouldn’t sound Czech. I wanted this to be perfect, because it was again overlapping Edward Norton’s speech. And the feedback I got from the post production company in the US was very positive.”

The Illusionist was a period piece, a romantic mystery set in Vienna in the late 19th century, but like all 21st century productions, it was shot in modern day environments, which can pose many problems for sound crews trying to capture quality audio.

“Nowadays you just simply can’t get with the boom where you want to be. You have wide shoots with difficult lighting setups,” Forejt says, adding, “The environments where you are shooting are many times not ‘clean’. There’s noise everywhere. Cars, airplanes, everything around us is alive, and so the wireless certainly helps to fight all this and record clean dialog.”

For Forejt, that has meant trusting Audio Limited, a UK-based wireless manufacturer, and Sound Devices, an audio manufacturer headquartered in Wisconsin, USA.

“On many of these productions I was using Audio Limited wireless,” he says. “I still have 4 analog 2040s from Audio Ltd on my cart, which I use frequently.”

Forejt first encountered Sound Devices back when the company released a camera-mount video recorder. He’d also heard of their 788T audio recorder, but he didn’t invest in their gear until they launched their 6-Series audio mixers with integrated recorders. “When the 664 came out, I started to pay close attention… Once the 688 came out, I was sure that would do the job. I didn’t hesitate to exchange all my former recorders, all Fostex for the 688, and I must say I am extremely satisfied.

“My current setup is, at the heart, the 688 with the SL-6 on top, filled with three A10 receivers, and six digital transmitters by Audio Limited. And (I also use) the CL-12 and Wingman app.”

The Sound Devices 688 mixer/recorder, when combined with the SL-6 powering and wireless accessory, offers easy integration of multiple channels of wireless connectivity by accepting three dual-channel slot-in receivers. Using SuperSlot-compatible receivers like the A10s adds wireless control and monitoring to the existing power management and audio interconnection. The CL-12 is a linear controller for cart-based applications, and the Wingman app is a wireless remote control option for the 688 via Android or iOS mobile devices.

Forejt says, “What I like is that even though I have all this installed on my sound cart, it is not a problem to quickly take my 688/SL-6 in a bag and basically be ready to go if needed. Also, it is of great importance for me that the A10s can work with Phantom power and that I can very quickly connect bigger microphones to it.

“For example, on the production Carnival Row, we had a few shooting days in the mountains. You couldn’t take much equipment—small backpack, minimal setup,” he says. “Unfortunately, at that time, the A10 wasn’t available yet, but that would have been a perfect solution. These are exactly the situations where I appreciate small compact setups with integrated powering.

“(So) I started with the analog 2040 from Audio Limited and then in the middle of the production, I switched to the digital A10.” About the transition from analog to the latest in digital wireless technology, he says, “The difference in sound quality is pretty noticeable. Dynamic range and the clarity of sound you are getting out of the A10s is a great difference. All connection issues with analog transmission was just eliminated from one day to the other…. Also the frequency range that you can transmit due to the new A10 wireless system is much richer.”

Forejt explains why, when working with wireless, the output power adjustment is dictated by set requirements. “You cannot always use the same settings, distances and positions of the antennas. There is a different setup in a studio than on a field or on city streets.” Higher power can drain batteries faster, plus outside transmissions can interfere and cause problems.

“The RF spill on video transmitters is just enormous, and even though they are using a very different frequency—somewhere around 2-5 Gigahertz—it can cause a lot of issues for wireless sound,” Forejt admits. “The easiest fix in such situations is to adapt to the circumstances, and with the A10 you can easily go into the mobile app and just raise the transmitting power. In this regard the A10 is super comfortable in comparison to the analog systems. All in all I am very, very happy about the new A10 (system). It is a fantastic product, and I love it.”

Forejt purchased his new A10 system and all of his Sound Devices equipment from Janz Audio, a Czech-based reseller for both Audio Limited and Sound Devices. Forejt says, “This is a fantastic company that really takes very good care of their customers. They understand our business… know the products perfectly and can solve most problems directly.”