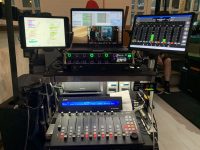 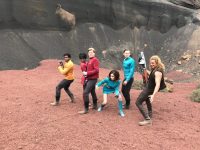 John Rodda happened into a job in location sound, and has since created an illustrious career.

“I started work in films and TV at the age of twenty. I was offered work on a farm on the north coast of Cornwall. During my time there, my boss discovered he’d been left a substantial inheritance and decided to make a movie! Two years later I left to freelance and moved to Bristol. Since those early days and pretty humble beginnings, I’ve worked my way from corporate video, news, documentaries and current affairs to TV drama and feature films and picked up a few awards on the way.”

After trying different recording configurations, Rodda decided on the Scorpio.

“I’ve carefully considered my choice of recording set-up to take me through the next five to ten years. I need a reliable, adaptable, ergonomic machine because it’s the primary tool with which I do my job. I felt it was time for a change so I found myself trialling a demo Scorpio, being amazed by it’s features and flexibility then reaching for my cheque book. Scorpio is very well thought out and has incorporated many of the great features of the 6 and 7 series machines and introduced a lot of exciting new options too. There are a lot of improvements still to come, but I’m in no doubt that Sound Devices are on the right track with an exceptional product.”

Although the Scorpio is new to Rodda’s kit, he has been using Audio Limited wireless throughout his career.

“I’ve been an Audio Ltd customer since the 1980’s. I live quite close to the company offices and have been friends with Kishore Patel (former managing director Audio Limited, current VP of Sales at Sound Devices)  since my early days in the industry, so my choice of A10’s and the A10-RACK were a no brainer. Setting up my A10-RACK and Scorpio to communicate was a breeze: routing tracks is pretty intuitive and only needs to be set-up once unless equipment or configuration changes need to be made. With the addition of the Dante virtual sound card, I can feed all my Scorpio ISO tracks and mixes to Boom Recorder on my laptop to provide a fully featured, timecode locked back-up recorder. I’m using the RF amplification built in and phantom powering of the A10 Rack for my Wisycom shark fins. I’m amazed at the range of the A10 radios in this configuration and have achieved very impressive results with my transmitters set to low power. I have ten channels of A10 radios: four receivers in the A10-RACK are connected to Scorpio via Dante to tracks 3 – 10, another A10-RX for my two A10-TX boom rigs, which are sent to Scorpio via AES-3 to inputs 1 and 2. Inputs 11 to 16 remain free for other mics or line sources like playback from my laptop.”

“We shot the whole show in just twenty days, including a trip to Lanzarote for the alien planet sequences. It was a relentless shoot with four, five or six scenes run together into one “take”. We often shot without meaningful rehearsals and went back to the top of the scene again and again with “rolling resets” where camera just keeps on running. Despite all this, the adrenaline rush of the shoot, fantastic performances by the cast and positive atmosphere on set meant we all knew we were making a really great show. All the same, I had no idea just how well the episode would turn out and to be honoured with my second CAS award, an AMPS award and another BAFTA nomination was a truly humbling experience.”

Rodda enjoys the challenges of complex productions and the ever-evolving landscape of production sound.

“Different projects are challenging for different reasons. I’ve always enjoyed historical drama and was very happy to mix production sound on shows like Longitude and The Lost Prince.

28 Days Later was a tough shoot in it’s own way, back in the days of DAT tape and Tascam DA98 8-track recording with long, long night shoots.

The toughest shoot I worked on was Shackleton the story of the British explorer who set off from England in 1914 to cross the South Pole. We shot the show in London, Iceland and Greenland and it was a totally unforgettable experience, working on a period ship, moving ice flows and the small wooden boats. We were built for adventure and this was my kind of show.

I’m currently shooting Lethal White the next story in J.K. Rowling’s successful detective series published under the pen name of Robert Galbraith. It’s a high profile production for HBO and BBC so expectations are high and there’s quite a lot at stake in implementing a whole new mixing and recording system.

We’re in a world of continuous change as updates, improvements and totally new equipment is introduced. We’re film-makers first and foremost and this is a creative endeavour. When I first started recording sound we had just one track and quarter inch tape to record it on.”

“As the the years passed we found ourselves progressing to more tracks, more cameras and more radio microphones. Our responsibilities have expanded beyond all recognition but the simple fact remains that we are there to help the director tell his story to the very best of our ability. Scorpio and my A10 Digital Wireless System are some of the very best tools for the job.”

For more information about John and his work, visit his website.