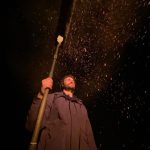 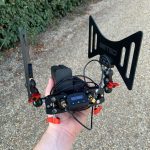 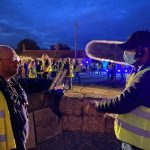 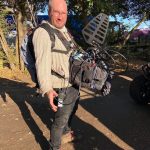 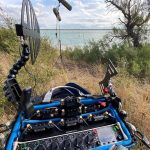 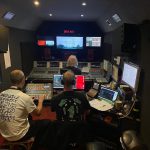 “SoundCatchers was a part of a larger sound team on the shoot. We were in charge of supplying the on-location dialogue to the show sound mixer in the OB truck where it would be mixed in with sound effects and music. We had two boom ops and two mixers who would send mix-downs through the four wireless channels to the OB truck.”

“The shoot was a twelve hour live blend of an art piece and drama that falls between the Summer and Winter part of the story for the miniseries The Third Day. The camera, art and creative departments were from the drama world. The cast and story are heavily based in the theater world with Punchdrunk’s improvisation style. The technical staff were from the live broadcast world so it was a real melting pot of getting the creative aspect to work with what was possible from a delivery point of view. We came at it from the live tech point of view rather than the drama side. There was no way to get a cart around the island!”

“In the end the sound kit dictated how we approached the shoot. We knew we could only send four channels of dialogue back via RF to the OB truck at any one time, so with that in mind we went through the script with the show mixer and selected which character was sent on which channel at different scenes throughout the day. We had two bags each set up with a Scorpio, SL-6 and twelve channels of Audio Ltd. A10 Digital Wireless systems, so that if we had any tech issues the bags could be run in to cover each other. We had two wireless boom ops using A10-TX’s on the poles and A-RXMON’s to monitor. The assistant who was wiring talent used an A-RXMON too. We were on an island with limited ability to get equipment so we had to make do with what we had.”

“The bags had to be set up for a pretty grueling day. One bag did four hours straight then the other did four and a half hours then back to the first bag for another four and half hours. We were constantly recording and needed battery changes every 85 minutes or so. We hot swapped NP1 batteries in a way that didn’t interrupt the recorders.”

“We heavily relied on the routing capabilities of the Scorpio as well as the ability to quickly access the busses in the channel menu. We split the two teams up at places we knew we could swap over and not cause any problems, which turned out to be the start of each act. We had to have everything in a bag due to the terrain and the nature of the location and the show itself. We decided on 12 channels of wireless per bag as that’s the amount of physical faders a Scorpio has, coincidentally that is also the amount of receivers that an SL-6 can power with SuperSlot and from the DC outputs on the side. We needed a way to keep a Scorpio, six A10 receivers and an Audio Wireless distro going for four to five hours continuously without access to mains power and the SL-6 was the solution. It turned out to be the core part of the bag. There was just enough amperage to power everything from the hirose input to the SL-6 that allowed the operator to hot swap the NP1 inside the SL-6, quite impressive for something that was built before the 8-Series existed and retroactively made to work with the 8-Series. We had 4 channels of audio we could send back to the OB truck via a separate transmitter in a backpack. So each “scene” would have a number of known characters. Using busses we could send different channels to predetermined channels so the OB mixer knew which character was where.”

The built-in features of the A10 System and Scorpio made an unpredictable shoot manageable.

“Automix was used on channels we needed to cross fade and it helped out due to the improvised dialogue. We had comms to the OB truck, so when I could hear the OB mixer saying there is too much fire sound or another unwanted noise in a scene then I could tickle in a bit of NoiseAssist to help reduce unwanted background noise. If an actor had a bit of a noisy outfit we could dial some of that out.”

An imposing terrain coupled with a live event made for a unique shoot.

“The main issues that we faced on location were water, mud, saltwater and moisture. It rained for the first four and a half hours on the 12 hour shoot, which is made up entirely of exteriors. Every transmitter was sealed against moisture, with some being placed in aqua packs. At one point, we had actors with transmitters up to their waists in salt water in a nerve racking scene hoping that no one fell over, this wasn’t planned but due to the live nature of it we just had to roll with it.”

“Later on in the show we had an actor fully submerged in mud as soon as they were done delivering a line. We had boom ops getting in and out of boats that would do a 360 shot, meaning the mixer had to hide in a bush to not be picked up in shot. Due to the improv nature of the show, you knew where you could stand but could never fully prepared for what was going to happen and would have to react as best you could.”

Wireless coordination was paramount to the success of the shoot.

Two out of the four members of SoundCatchers went to the island for the first week. We used an A-RXMON with two Omni paddles attached to it to scan along the route at key locations. Turned out to be a great way to get a clear idea of what frequencies were available to us without hauling the mixer around. Once we had that information we coordinated with the RF department to make sure we weren’t going to cause anyone else any problems as we had to get about 26 channels of RF for the show.”

“Both Ian at Audio Ltd. and Roger at Everything Audio gave some great tips on best practices with digital RF. We had the luxury of using three TV channels and were able to space out the 26 frequencies using the charts provided by Audio Ltd. to give ourselves as much breathing room as possible. Even though we had up to three RF backpacks at certain points outputting in the 2 GHz range right next to our receivers, the A10s never had any issues.”

“Autumn” was recently nominated for a BAFTA for Best Live Event. Watch “Autumn” Part 1 and Part 2.