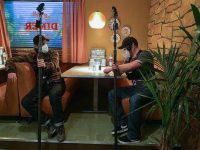 Can you walk us through your current setup?

I chose the A20-Mini due to a couple of factors – the quality of sound is second to none, and the size of the transmitter. I have been using Sound Devices equipment for the last 10 years and it has never let me down. Also, the customer service provided by Kish and his team goes above and beyond every time.

What do you like most about the A20-Mini? What features are you using the most?

The features I like the most about the A20s are the ability to set the gain level of the transmitter remotely, the size and ergonomic design, and in particular, the ability to jam timecode and record directly on the transmitters – in case you are working with a director that on a whim, decides to shoot a 3-page scene in a car, shooting handheld across central London, which is what we had done on a previous job.

Tell us about Captain Marvel 2!

Captain Marvel 2, aka The Marvels, was a great job to do. No two days were really the same. The most challenging aspect was the super suits. In the case of The Marvels, we did not only have one superhero character, but 3, and they had various versions of their suits. No two were the same. The suits were extremely tight-fitting, and the cast refused any other transmitters apart from the A20s.

Luckily, I have a fantastic team, and the costume department was very much on our side and extremely helpful. We were fortunate to get some prep time with each costume and really experimented where would be the best mic placement for each character in each version of their suits. In some cases, we had microphones in placements I had never tried before, and we captured some great sound.

On a side note, we have just finished shooting Magic Mike’s Last Dance with Steven Soderberg and Channing Tatum. The A20s worked perfectly on that. As you can imagine, a stripper movie poses a lot of challenges for the sound department in terms of radio microphones. We ended up sewing the transmitters inside the clothing, so when they stripped, the transmitters came off with their clothes. Due to the lightness and size of the A20s, it worked very well.

Can you share a tip that you wish you had known at the beginning of your career?

Don’t be afraid to experiment and think outside the box. That’s what we did on The Marvels, to great effect!

For more information on Paul’s work visit his website.